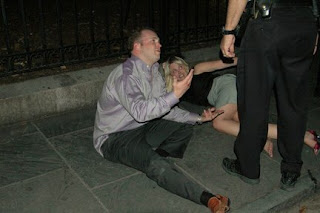 I can't get this photo of Allee Bautsch and her boyfriend, Joe Brown, out of my mind.  It was taken shortly after the attack on them last Friday night in the French Quarter.  I don't know these people, but I do.  They could be anybody.  It could be you stretched out there on the street, using your purse for a pillow, with a broken leg.  That could be you sitting there with a fractured jaw, feeling angry and helpless, next to your injured girlfriend.  You tried to protect her, but you couldn't.  The thugs came after you both.

There's been much fuss and discussion as to whether or not this was a politically motivated attack or not.  It really doesn't matter in the end.  For me, it's more about the physical and mostly the psychological trauma these two innocent young people are facing.  All they did was leave a restaurant and try to get to their hotel.

The police statement is heartbreaking, really.  Here is a portion of it, transcribed by Michelle Malkin:

“Shortly before 10:30pm, Mr. Brown and Ms. Bautsch left the restaurant and began walking towards St. Louis. Street. Mr. Brown noted there were still several protestors loitering in the area, but not nearly the number which had been present earlier. Soon after leaving the restaurant, he heard what he described as ‘cat calls.’ At an unknown point within the 400 block of Royal Street, both Mr. Brown and Ms. Bautsch then crossed from the Brennan’s side of the street to the Supreme Court side of the street. They continued to walk towards St. Louis when Mr. Brown began to hear people behind him scream obscenities. Initially he was not sure if thoese were being directed at him and his girlfriend, or if they were simply the outbursts of drunken revelers. As they neared the intersection, Mr. Brown stated he heard subjects state thing such as, ‘Little blonde bitch,’ ‘You’re a fu**king faggot,’ and ‘You think you’re fu**king special.’ At this point Mr. Brown realized these derogatory terms were being directed at Ms. Bautsch and him. He then requested she begin to walk faster toward the Omni-Royal hotel located at the intersection of St. Louis and Royal. Mr. Brown also recalled the farther they got from the restaurant, the closer these subjects got to them. When they reached the corner of St. Louis and Royal, Mr. Brown and his date turned south on St. Louis. It was at this time that one of the subjects pushed him into the iron gate which surrounds the State Supreme Court. He then fell to the ground, and one of the attackers got on top of him and began to attack him. Mr. Brown stated as he was being pushed to the ground, Ms. Bautsch was also either pushed down or fell down near where he was. As he fought to get his attacker off of him, he heard his girlfriend cry out in pain. She then repeatedly stated,”Oh my god, my leg is broken.”

Awful.  Just awful.  I hope they catch these thugs.  I really do.

It's a black eye for New Orleans, surely.  If tourists aren't safe in the French Quarter, and they aren't, then there are some real problems in New Orleans.  But, to be fair, it could happen anywhere.

My prayers and wishes for a speedy recovery to both Miss Bautsch and Mr. Brown.
Posted by Pat Austin Becker at 1:47 PM

Truth will come out eventually. It always does.

Right. They totally look like they fell. Can one be that obtuse?

If you see the close-up of her face, you'll see she's grimacing in pain. Her leg was broken in 4(?) places because someone jumped up and down on it on the curb.