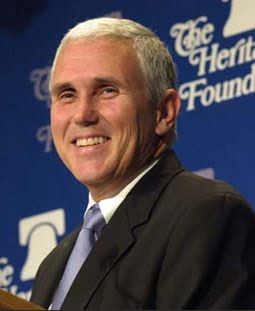 I finally got around to watching the Mike Pence speech that everyone posted yesterday.  You can watch it here.

Don't have time to watch all of it?  Here are some highlights:

"Let's be honest - three years ago Republicans in Congress didn't just lose their majority, they lost their way."

"House Republicans will not rest until we have repealed that government takeover of health care lock, stock, and barrel!"

To Obama's taunt of "Go for it" with regard to repealing Obamacare, Pence says, "Count on it."  He touts tort reform and portability of policies across state lines.  He says repeal is a two-step process:  first get rid of the Pelosi administration.

"We cannot rest, we cannot relent, until we win back the Congress for the American people.  So how do we do it?...We've got to stay focused.  Distraction is the enemy of success...we've got to resist the temptation to look past the next election."  Pence sees election day 2010 as the next focus and battle for Republicans.  "We must  campaign as conservatives" he says.  "We don't need a Republican majority on Capitol Hill.  We need a Conservative majority on Capitol Hill."

"Defending the nation means keeping all of our options on the table to deter our enemies and protect our friends, including nuclear weapons.  History teaches that weakness arouses evil."

Pence says KSM should not be tried in civilian courts but at Guantanamo Bay "where they belong" which received a huge round of applause.  He then moved on to discussion of Israel saying he never thought he'd see the day when an American administration denounced Israel's rebuilding of Jerusalem and said that America stands with Israel.  More applause followed by a long "U.S.A.!" chant.

Pence says a better America means restoring true fiscal responsibility in American government.  The nation's fiscal path is simply unsustainable and requires serious revamping at this point.  The time has come has to limit federal spending to 20% of the nation's economy, he says, with a Constitutional amendment if necessary.  He also spoke of the lack of incentive to build and create in America which is what originally made America great.

Pence says that our current crisis is not just economic and political but moral.  We've ignored time honored principles of honesty and integrity.  We've lost sight of the fact that you should treat the other guy the way you want to be treated.  We must renew our commitment to family and faith.  He says it's wrong to take the tax dollars of millions of pro-life Americans and use it to fund abortions here at home and abroad.  Pence calls for the end of federal funding for Planned Parenthood.

In closing he says, Stay focused,  Elect a conservative Congress.

It was a barn burner speech and really inspiring!  Is Pence on anybody's list for 2012?!
Posted by Pat Austin Becker at 10:21 AM

Pat, I talked with a friend Saturday who was at the conference and heard the speech. She was extremely enthusiastic about his remarks and also suggested he may be someone to consider for 2012's presidential race. Thanks for posting this.

Linked to at:
And So It Goes In Shreveport...Again

Pat - I was at the SRLC...got a picture with him on my facebook page!! He was a really great speaker, reminded a few of us of Ronald Reagan in a way. Very Very nice man...he even complimented my Republican/Patriotic Jacket I was wearing...said his wife would love to have one. I told him I would see what the Republican Women of Bossier could do to get one for her...