The Shreveport Times Lets Their Bias Through

The Gannett owned Shreveport Times posted their article on yesterday's Tea Party protest with the usual bias and misinformation.  It's hard to believe Drew Pierson was at the same event that I was.  The headline is the first misleading fact in the post:

Hundreds Come Out for Tea Party

Hundreds?  I don't have a good crowd shot because there was no higher elevation for me to ascend to get one, so mine are all ground shots, and not panoramic, but I think we can conclude from the pictures that it was absolutely more than "hundreds" in attendance. 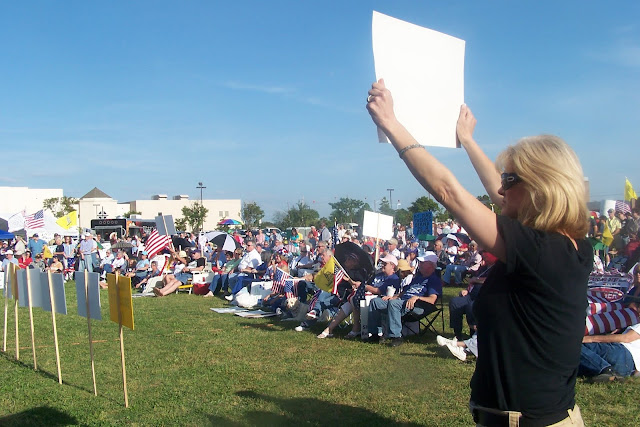 By 5:00 there were at least 800 there and that was thirty minutes before the event started.  By 6 or 6:30 there were easily 3000 there.  One security officer told me 4000 but even if you go with the more conservative 3000 broadcast by KTBS last night, it's still more than "hundreds." 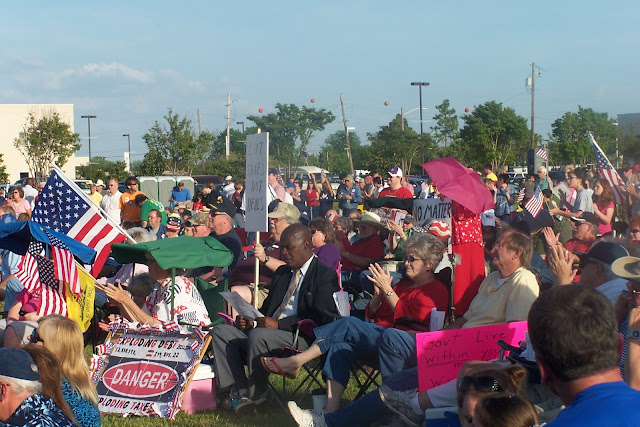 Pierson's bias comes through loud and clear in his reporting of the event itself when he writes of one of the speakers, Mike Johnson:

Johnson listed various offenses made by the current administration to Thursday evening's receptive crowd, gathered on the lawn next to the First Baptist Bossier and Bossier City Hall, such as the Thursday morning ruling by a federal judge in Wisconsin that the government-recognized National Day of Prayer, a Congressional act calling for the president to issue a proclamations urging the American public to pray on the first Thursday of May, was unconstitutional.What Johnson didn't mention, however, was that the lawsuit was filed by a non-profit atheist group, and was not only defended in court by the Obama administration, but Obama actually issued such a proclamation last year.


Besides misrepresenting what Mike Johnson was saying, Pierson misses the point and confuses the mission of the Tea Party.  Yes, protesters are angry and Obama, but it's not just Obama.  We're angry at all the liberal policies coming out of Washington and the disregard of the Constitution.  We're angry about the out of control spending.  The point Johnson was making was what he called the assault on religious values and the need for conservatives to defend their rights to prayer.

Pierson makes no mention of the moving speech of Sharon McCullar; there would be little he could disparage there.  Sharon talked about, among other things, the military service of her sons and the sacrifices our soldiers make for us.

It was a brief, token article and I suppose for that we can be grateful.
Posted by Pat Austin Becker at 6:33 AM

Thanks for the post, and thank goodness we have blogger buddies to tell us and show us what is really going on with our grass root movement to take our country back!

Pierson writing skills seem to be greatly lacking too, in that, when he is trying to convey an otherwise ununderstandable, and sometimes not always to the point but rather less than clear and transparent, but not so misleading as to completely stray from the topic at hand, he uses what is often mistaken for the President's little brother, OBAROS (One Big Ass Run On Sentence).

Why do you even look at the Shreveport paper? I stopped years ago and my life improved! I don't condone ignorance, but reading trash is worse than ignorance. Besides, the paper quality is too rough to make it a really useful news publication.

Gannett can't die soon enough to suit me.
I took early retirement in 2000 rather than work another day under their "management by fear" policies at The Indianapolis Star. The first thing I did after I walked out of the office was call and cancel my subscription.

I haven't even looked at my paper, yet, and I probably won't. The only reason I get the Shreveport Times is to do the crossword puzzle every day, but lately I have been too busy outside to even do that. I need to cancel it. I said all that to say this.....I bet he didn't have a picture like you have here that actually has a black person at a Tea Party. Heaven forbid!!!!

The article also claims there were "dozens" of tea parties across the country.

I haven't found a count yet, but since last year there were over 800, I have a hard time believing that part either!

I left Mr Pierson a message:

It is my experience that reporters should not interject their opinions into a piece. If you wished to say that Obama later instituted prayer day a much better ploy would have been to get a quote from some "neutral" or "learned" person stating such. As it was all you did was to state your opinion, and from the tone of the article we know what that's worth.

In reference to your statement "Johnson also made a veiled reference to long-refuted claim that Obama is not a native-born citizen of the United States saying the radical left mocks our nation's birth certificate": Wrong again. He was talking about immigration.

With quality reporting like this it is really no wonder that The Times is bleeding red ink. Best of luck in your future occupation, whatever it may be.