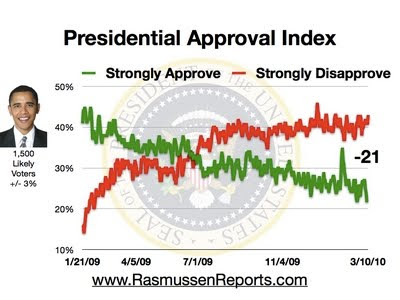 It's all about the numbers. Obama's "passion index" today matches his lowest ever. More telling, though, to me, is that only 42% of Democrats strongly approve of his performance.

57% believe that that Obamacare will hurt the economy.

42% of those polled support Obamacare. 53% are opposed.

Meanwhile, Obama is off to another rally today in St. Louis. Because maybe if he blathers about it one.more.time somebody will decide it's a good plan after all.

Meanwhile, Lindsey Graham wants Obama to pay more attention to immigration reform - because hey!, he's not low enough in the polls already. I mean, that's such a popular topic, no?
Posted by Pat Austin Becker at 9:39 AM

Email ThisBlogThis!Share to TwitterShare to FacebookShare to Pinterest
Labels: polls

What is so typical of the MSM is how they ignore how Obama's numbers are sinking, but every day they published G.W. Bush's numbers.

They are doing everything they can to save the S.S. Obama from having the same fate as the Titanic.

Interesting how polls are done differently, eh? Our MSM friends at the AP are reporting today that Mr. O has an approval rating of 53%. Of course they just took a random poll not a poll of voters or anything and it was somewhat heavy with dems - really...

As to the other - I think they keep introducing and reintroducing all these various controversial topics to keep everyone off balance. It's hard to keep your eye on every trick they're trying to pull. *sigh*. Nov 2010 can't come soon enough.