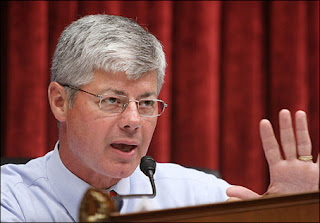 It looks like Stupak is laying the groundwork for a cave-in on Obamacare:

Rep. Bart Stupak said he expects to resume talks with House leaders this week in a quest for wording that would impose no new limits on abortion rights but also would not allow use of federal money for the procedure.

"I'm more optimistic than I was a week ago," Stupak said in an interview between meetings with constituents in his northern Michigan district. He was hosting a town hall meeting Monday night at a local high school.

"The president says he doesn't want to expand or restrict current law (on abortion). Neither do I," Stupak said. "That's never been our position. So is there some language that we can agree on that hits both points — we don't restrict, we don't expand abortion rights? I think we can get there."

Michelle Malkin reminds us of Stupak's words in December 09:

“We’re getting a lot of pressure not to say anything, to try to compromise this principle or belief,” Stupak said. “[T]hat’s just not us. We’re not going to do that. Members who voted for the Stupak language in the House – especially the Democrats, 64 Democrats that voted for it – feel very strongly about it. It’s been part of who we are, part of our make up. It’s the principle belief that we have. We are not just going to abandon it in the name of health care.”

She's right that it's time to remind him of his words.

The National Journal has pulled together a list assessing where the votes are right now:

A reminder of where we stand now: Health care legislation passed by a 220-215 margin on Nov. 7. Since then, Reps. Neil Abercrombie (D-HI), Robert Wexler (D-FL) and Eric Massa (D-NY) have resigned. Rep. John Murtha (D-PA) passed away. Of that group, Abercrombie, Wexler and Murtha voted in favor. Massa voted against. Rep. Anh "Joseph" Cao (R-LA), who voted for the bill, has said he will vote against.

That means Pelosi has lost 4 votes, bringing her to 216. Because there are only 431 members of the House, thanks to the vacancies, Pelosi needs exactly that number to pass reform. Arcuri's decision today brings the number of yes votes down to 215 -- one below the number needed to pass.

Too close for comfort.

(H/T: Memeorandum)
Posted by Pat Austin Becker at 5:10 AM

Of course Stupak will cave. He probably intended to cave the moment Nasty Pelosi, Reid, Obama, and wiseguys make him an "offer he can't refuse".

Rep. Bart Stupak (D-MI), who earlier this week said he is optimistic there will be a compromise on abortion language in the health care bill, told the Weekly Standard yesterday that there is no such deal -- not even close.

"Everyone's going around saying there's a compromise -- there's no such thing," Stupak said. He said that "the majority party can get [a deal] done," but "no one has said here's how you do it, here's the legislative scheme."

He did say he had his first real meeting with House Majority Leader Steny Hoyer and Rep. Henry Waxman (D-CA) about the language.

Asked if his "optimistic" comment meant he would cave and vote for a bill that doesn't include his preferred abortion language, Stupak said "Obviously they don't know me."

"If I didn't" cave in November, "why would I do it now after all the crap I've been through?" he added.

Stupak, who has threatened to vote no along with 12 other unnamed congressmen over abortion, said he refuses to vote for the Senate bill as-is, even with a promise to fix it later.

"If they say 'we'll give you a letter saying we'll take care of this later,' that's not acceptable because later never comes," he said.

They just keep up this nonsense arguing over points when the whole thing needs to be stuffed in the trash can.