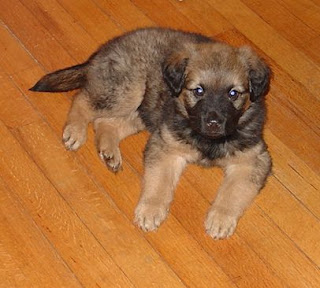 So many of you have so generously donated to help save Taz that I wanted to update his current situation.

(This is a puppy photo - he's a year old now. His back, right leg is shaved from his last surgery. I'd offer a more current photo but we've been trying to keep him very still, and he gets excited when company comes over!)

Donny and Gena took him to the vet this morning for a recheck of his surgery (his second one) from last Wednesday. The doctor wasn't happy with the healing and thinks Taz is moving around too much. He's a one year old Chow/Shepherd mix and it's hard to keep him still!

So the vet decided he needs to be boarded for one week to keep him in a more confined area. They're putting one of those cones on his neck, too, to keep him from licking his stitches.

This new adventure comes at a cost of $100. This is on top of the original $1200 surgery and then the $700 follow-up surgery. They've still got the second leg to do once we get through this!

At any rate, it was a great relief to Donny and Gena when I told them we'd raised enough here to cover the boarding fees! I can't express my appreciation enough to my readers for that!

This is such a sweet dog and as I said the other day, I can't stand that he might have to be put down because of the expense in operating on his back legs.

Lots of people would say, "It's only a dog! Put him down, for cryin' out loud! Get another one!" But as many of you know, your pets become like children to you; they're part of the family. And you'd do anything for them.

So thanks again for your support for Taz and anyone who still would like to contribute, hit the button below or on the side bar. We've got a long way to go!