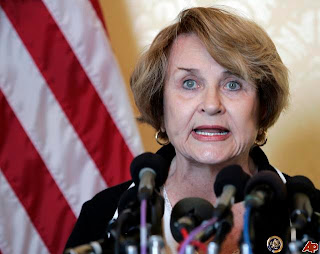 The Revolution is at hand; should Congress attempt the so called "Slaughter Solution," I'll predict a massive overthrow at the polls of the Democrats not just in the fall but for the foreseeable future. Louise Slaughter (pictured) is crafting a new Rules plant to save the day for the Democrats.

This explanation was posted on Boehner's blog yesterday:

The Slaughter Solution is a plan by Rep. Louise Slaughter (D-NY), the Democratic chair of the powerful House Rules Committee and a key ally of Speaker Nancy Pelosi (D-CA), to get the health care legislation through the House without an actual vote on the Senate-passed health care bill. You see, Democratic leaders currently lack the votes needed to pass the Senate health care bill through the House. Under Slaughter’s scheme, Democratic leaders will overcome this problem by simply “deeming” the Senate bill passed in the House - without an actual vote by members of the House.

As Daniel Foster at The Corner explains it:

It would allow the House to pass a reconciliation measure on the health-care bill (complete with fixes to the Cadillac Tax etc.) without first passing the Senate version. It would thus defuse mitigate the threat — ingeniously pounded into the heads of rank-and-file House Democrats by Senate Republican leadership — that the House could pass the Senate bill only to be double-crossed by the Senate on the sidecar. And, worse, that the president could sign the Senate bill into law, leaving wavering House members on the hook for supporting it.

Foster goes more into the mechanics of the Rules committee and how they can actually do this here.

This Congress is already playing fast and loose with the Constitution as it is with regard to this bill. Should they attempt this move I suspect they'll draw a quick legal challenge. Yes, the Rules Committee can "do anything" as Foster says, but this move is unconscionable. It says, "We know we don't have the votes, we know we can't get the votes, and we're going to over ride that and do it anyway." Government by fiat.

Meanwhile, Americans continue to turn out in protest of Obamacare.

Melt the phones, people. We can't let up.

(More at Memeorandum)
Posted by Pat Austin Becker at 5:05 AM

To save a lot of trouble, President Obama should just 'deem' ObamaCare into law.

From what I have heard about the "Slaughter Solution" at best can be described as taking the Constitution and wiping one's a** with it.

I just heard a moment ago on Rush that Nasty Pelousy and her ilk wants to just "deem" the passage of the Senate bill without actually voting on it. I hope to God this isn't true. Or maybe I do, because it sounds so unconstitutional that it may be reversed through the courts, unless the commie bastards that have taken over the other two branches of government takes over the third (which is the courts).