My FMJRA Round-Up is going to be delayed today because of the rapidly changing health care coverage.

I'm going to be updating this post through the day on developments and I know others will be as well. I want to point you first to, of course, Stacy McCain who has Smitty "on the ground" (lordy I hate that expression!) at the Code Red Rally in Washington. Watch Stacy's place for updates, too.

The Corner, as always, keeps thing pretty up to date also. Kathryn Jean Lopez reports this morning of a potential collapse of the Stupak deal which can either be good news or bad news. Either he's holding his ground, or she already has the votes and doesn't need to dally with him any longer.

K-Lo also reports that "Stupak swingers" who might need phone calls right about now are: Kaptur of Ohio, Berry of Arkansas, Cueller of Texas, and Rahall of West Virginia. If you live in their district, call them!

The Hill's latest Whip Count is here. Numbers of those we need to keep calling can be found here.

Rep. Bart Stupak will have his press conference this morning at 11 a.m. ET.

Update 10:08: I'm watching the Rules Committee. Rep. Paul Ryan is such an awesome speaker and champion for this fight! He is going head to head with Rep. Slaughter right now and is not backing down one iota. She's arguing with him about Medicare and whether or not his plan phases out Medicare. She's uninformed and not really interested in the answer to the question she's posed as she won't let him answer. He's holding his own though.

She insists that Ryan's plan "does away with Medicare and leaves people with a voucher" to go find their own coverage "if they can."

Ryan: "I realize you want to talk about somebody ELSE'S bill rather than your own legislation and I understand that!"

Update 10:15: Live streaming of the Kill the Bill Rally here.

Two pro-life GOP members close to Stupak tell NRO that any Stupak deals are off. They just spoke with him and they said he's finished with Pelosi. They rejected his enrollment corrections proposal.

Again, she may or may not need his vote(s). Not sure how this will play out yet. He's canceled his press conference.

Boehner tells NRO that Pelosi still doesn't have the votes.

Update 11:28: Memeorandum has a growing thread of coverage.

The Rules Committee is in recess at the moment. Pelosi is still blustering and says she will have the votes when she comes to the floor. I guess that means she doesn't have them now.

The Corner reports that " the Majority are working on an executive order with Stupak-like language in an attempt to pacify pro-life Democrats."

I have met people who lived though the nightmare inflation in Germany in 1922. It really took a suitcase full of german marks to buy a loaf of bread. The price of lunch in a cafe went up before the customer could finish it. When the money ran out the government simply printed more of it. We seem to be headed down the same road. We are making a mad dash toward socialism and financial ruin.

Meanwhile, Michelle Malkin posts on the possible executive order in the works.

Keep up the heat!

Update 12:08: Fox News has a great livestream of the Code Red Rally here.

Here's some pics from the Rally: 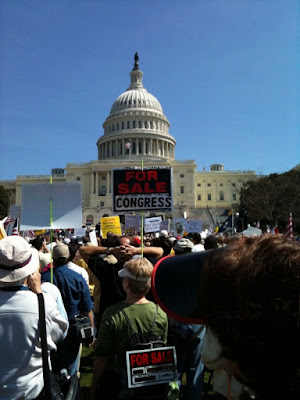 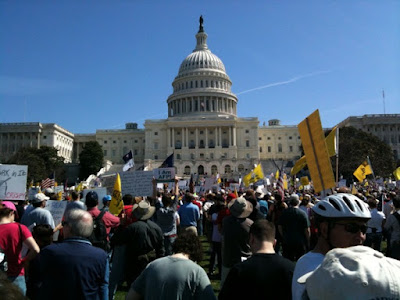 Update 1:05: Daniel Foster points out that military plans may not be covered under Obamacare unless some bureaucrat "deems" it an acceptable plan. Yikes.

Update 3:46: I had to step away for a bit to do the daily check-on-mom thing, and to put on a pot of homemade chicken soup because I feel like holy-crap-warmed-over. Chicken soup with lots of garlic and pepper always helps. At any rate, in my absence I see that Demon Pass has fallen by the wayside. Here's Ed Morrissey on that:

So what does this mean? Hard to say. It could be that the heat on Democrats for using DemonPass made it too difficult to hold onto votes; Pelosi may have calculated that she’d net more votes if she split the bills properly. On the other hand, it could also mean that Pelosi has all the votes she needs and no longer needs the self-executing rule to get the bill out of the House.

If anyone wonders which it is, Major Garrett of Fox News helpfully tweeted that he believes that Pelosi now has the votes for tomorrow. If that’s too pessimistic for you, remember that DemonPass was intended to protect Dems opposed to the Cadillac Tax and other issues in the Senate bill. The politics of the bill have only become more fraught since they floated that strategy, which could mean that Democrats now think it won’t pass — and need a reason for its demise other than a failure of Pelosi to whip the count.

In other words, nobody really knows what this means.
Posted by Pat Austin Becker at 8:26 AM