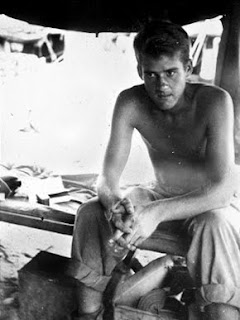 I just finished reading China Marine by Eugene Sledge (pictured). It arrived in the mail yesterday and at 160 pages it is easy to read in a weekend, or afternoon.

The book picks up where With The Old Breed left off. Eugene is shipped out of the Pacific to duty in China where they were to perform various guard duties and maintain order as China descended into Civil War. The book ends with his assimilation into civilian life in Mobile, Alabama.

It's a beautiful book and had me in tears in a couple of places as he reconnects with his family, his old life, and builds a new life.

Once home in Alabama, Eugene earned a business degree and then floundered around in an unsatisfying career for a bit before his father, a physician, gave him some valuable advice. Noting Eugene's lifelong love of the outdoors and nature, he tells him:

"Fritz, why don't you write Auburn and inquire about entering one of their graduate biological programs? But don't become a medical doctor! The damned government is going to keep messing with it until they bring about socialized medicine and drive both physicians and patients to distraction."

Steve and I hit the jackpot when we were out shopping today and loaded up on books in anticipation of HBO's The Pacific mini-series next week. Steve has been reading my copy of With the Old Breed and is about to finish that. He'll be on to China Marine next. We picked up Island of the Damned by R. W. Burgin, one of Sledge's buddies in the Pacific. We also got The Pacific by Hugh Ambrose and I picked up Selected Chaff: The Wartime Columns of Al McIntosh.

I'm on to the Al McIntosh book now. I'll catch up with you later!

A friend gave me a copy of "With the Old Breed", and I'm almost done.

I pray to God they don't include the most gruesome of details from Sledge's book in The Pacific.

All of the books mentioned are USMC-centric. It should not be forgotten, that the Army also played a vital part in the Pacific Campaign. For instance, look at The Ghost Mountain Boys (published in 2007 or 08 as I recall) which recounts one battle by the 32d Division in the Philippines.

I am going to have to respectfully disagree with you.There has been too many movies showing sanitized versions of what happened.
I think the gruesome details need to be told to put a true light on the horrors of war and what the soldiers, sailors, marines, airmen, coasties, and merchant marines went through. To do otherwise would not do them justice.