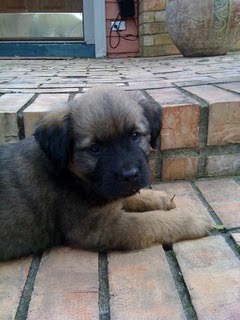 This is Taz. Taz belongs to my next door neighbors and good friends, Donny and Gena. This photo is of him when he was a puppy, last February. Donny got Taz at the pound for Gena for a Valentine's Day present; they had recently lost their first dog, Cocoa, to old age.

Taz has been a joy - he's part Chow and part Shepherd and crazy as they come. He's a smart dog, though; Donny has taught him how to pick up the morning paper from the curb every day. Rain or shine, Taz bounds out to the sidewalk and fetches the paper.

Except now Taz doesn't run anywhere. It turns out that he was born with a defect to his back legs which means without surgery on them, he'll be crippled, unable to walk, and probably have to be put down. Donny and Gena managed the $1200 for the first leg, but then something went wrong and they had to go back in this past week and do some correction. Another $700.

We're hoping this surgery takes. Then once he's healed, hopefully the other leg can be done.

Gena tells me it's very, very hard to keep a Chow/Shepherd puppy quiet and still so his leg can heal. I can only imagine.

I'm posting this because they need some help with saving this dog. The expense has become such that they may not be able to do the second leg. Should this first leg need more surgery, they'll quite possibly have to put him down. I just can't bear to see that happen. He's such a sweet dog and it's not his fault that his legs aren't perfect.

I'll post a more current picture of him in a day or two - right now they are trying to keep him very still and I don't want to excite him by poking around with my camera.

I have about $25 in my PayPal account right now. I'm donating it to the Taz Fund and am asking anyone else who wants to help save this dog to contribute whatever you can. Every Single Dime will go to Taz's medical expenses along with your good wishes.

Some people will say, "He's just a dog, for cryin' out loud!" but I'm a dog lover and it breaks my heart to see him try to limp across the yard. The vet believes they can fix this, given the chance, and he can live a happy dog life with four good legs!

So c'mon folks - hit the button below, or in the sidebar!

Update: Links hopefully fixed - thanks Trish for the heads up and the generous donation! You rock!
Update II: Links not working consistently - use the sidebar button, or the one below!
Update III: Thanks, Red! Taz & his parents are grateful!

Pat - your link to the tip jar is broken. When you click on it, it says "fatal failure" - I will donate when you get the link fixed. Don't 'cha just love it when any thing on the old PC says - "fatal"... :)

Augh! Fixed now. Thanks for the heads up!

Pat - I tried this in both IE and Firefox and it's still not opening for me from your post. Thought you'd like to know.

Strange. When I fix the link it works for a while when I test it, then apparently quits. But the donation button on the sidebar always works. I'm doing something idiotic.

If anyone is trying to donate, and the link is broken, just go to the sidebar until I figure this out!

Thanks for your patience!