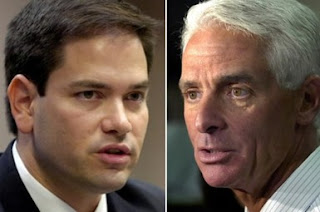 Who in the world is in charge of Marco Rubio's schedule? The first Rubio v. Crist debate is about to begin at this incredibly early hour. I'll be blogging so check back.

Update 1: Crist comes out swinging, accusing Rubio of running only for the purpose of "enriching himself" by using funds to get haircuts and other personal amenities. Rubio counters nicely saying saying that the campaign isn't about personal issues but about the people of Florida.

Update 2: Chris Wallace shows "The Hug" picture leading into a question about Crist's support of the stimulus. 211,000 Floridians have lost their job since the stimulus, Rubio points out. Crist responds by bantering about Rubio's days as a lobbyist. Wallace tries to bring him back to point. Crist says if he hadn't taken the stimulus funds 87,000 more people would be unemployed. Wallace asks Crist if he would have joined the three Republicans in the Senate who voted for the Stimulus and Crist says absolutely he would have.

Update 4: Crist is back to the haircut thing again. Rubio chides Crist for the continuing personal attacks. On health care reform: Crist says pre-existing conditions should be covered. He says repeal and start over, then touts the current program in Florida. Wallace points out that one tenth of one percent of Florida's uninsured have signed up for the Florida program. It's not really covering Florida, Wallace points out.

Rubio says there are so many things wrong with the health care bill, first among them is that we can't afford it. He touts tort reform, portability, etc. He stays the first step is to repeal it. Rubio says people should have the same sort of option members of Congress have; the employer based system should stay, but there should also be a system where small businesses can pool together and set up something as well.

On Twitter, @RubioPress links to a video where Crist says he would NOT repeal Obamacare.

Rubio says we need significant entitlement reform. On social security, Rubio says it cannot survivie in its current form. He advocates increasing the retirement age gradually. He advocates the Ryan Roadmap. Crist does not advocate increasing he retirement age. He would not change the cost of living adjustment. Crist says the answer is getting the waste and fraud out of the system.

Crist is dying to get off topic and talk about taxes. Wallace tries to channel him back but Crist holds firm and moves to taxes.

So, on taxes, Wallace points out that Crist broke his promise to Florida voters when he raised taxes and higher fees at the DMV. Crist says that's "not a tax, it's a fee. If you don't drive, you don't pay it."

Rubio: "The governor likes to call himself a Reagan Republican. I don't recall anyone ever having to ask Reagan if he was going to run as an Independent."

In closing, Rubio's line is "Who do you trust to stand up to Barack Obama?" He says we can't trust Charlie Crist to do that. Crist's closing focuses on personal attacks again and accuses Rubio of "cooking the books."

Overall, I'd give this one to Rubio because he tried to stay focused on the issues. Crist was more interested in running Rubio down than in putting forth his own agenda. I think Crist's choice of McCain as his favorite Senator tells us what we need to know about him, as well as his decision to stand behind the failed McCain/Bush amnesty plan.

Point for Rubio!
Posted by Pat Austin Becker at 7:57 AM