Osama bin Laden is Just Like Charles Manson, or Something... 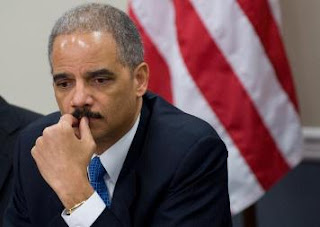 Attorney General Eric Holder continues to blow my mind. Just as soon as I've processed and compartmentalized the most recent lame-brained thing he's said or done, he does something else.

Today Eric Holder wows and amazes with his clairvoyant knowledge that Osama bin Laden will not be taken alive. Via Politico:

“Let’s deal with reality,” Holder said. “You’re talking about a hypothetical that will never occur. We will be reading Miranda rights to the corpse of Obama bin Laden. He will never appear in an American courtroom. That’s the reality….He will be killed by us or he will be killed by his own people, so he’s not captured by us. We know that.”

“Osama bin Laden, in your opinion, has the same rights as Charles Manson?” a dubious Culberson asked.

“In some ways, I think they’re comparable people,” Holder said.

I guess that if Osama WERE taken alive, Holder would be good with him serving life in prison at American taxpayer expense. Rep. John Culberson was incredulous:

“That’s incredible,” Culberson replied. “The disconnect—your administration, your mindset is so completely opposite where the majority of the American people are,” the Congressman said, arguing that disagreement with the Obama Administration’s terrorism prosecution policy drove the recent victory of Sen. Scott Brown (R-Mass.).

Pressing the bounds of reality even further, when questioned about the handling of Christmas Day bomber, Holder insisted that the 50 minutes of questioned endured by Abdulmutallab was "a fairly long period of time":

“I’ve heard a lot said that he was only questioned for 50 minutes. That’s a fairly long period of time,” Holder said. “If you look at the report of interview of what was gotten from him in 50 minutes—an hour, there was pretty substantial amount of information gotten from him.”

I'd venture to say that most common criminals are interrogated longer than 50 minutes.

It defies the imagination where this administration is coming from. Osama bin Laden is comparable to Charles Manson and fifty minutes qualifies as an extensive interrogation of an al-Qaeda terrorist.

What's next? Voting on bills that aren't even written yet?

Holder is cut from the same piece of cloth as his boss Barack Hussein Obama is. So making absurd statements that disconnect from reality are in keeping with what we've seen from this administration for over a year now.

None of it makes sense and many of us brace ourselves for the daily outrage.

Hmm, I read somewhere that ALL men were endowed by the Creator with INALEINABLE rights.

So yeah, obviously, bin Laden and Manson have the same right.