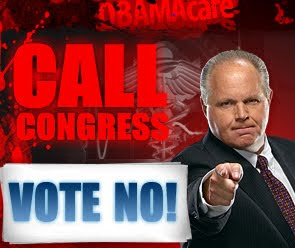 Driving to Minden today, we were listening to Rush Limbaugh on the radio. He had several callers who were all frustrated and trying to find ways to stop what is happening with the health care debacle.

Mark Levin called in and tried to clarify some of the issues as well. He's ready to go with his lawsuit should this thing pass on Sunday.

Rush mentioned this site - BarackHatesThis, which has the phone numbers of those we need to keep calling. It's a good, concise list.

As of now, I guess we're all anxiously awaiting the Stupak press conference and hoping against hope that he'll stand firm. It sounds like if he makes a deal with Pelosi, gets the language he wants, and votes for the bill, Queen Nancy is risking the ire and Nay votes of the Pro-life Democrats.

The plot thickens.
Posted by Pat Austin Becker at 8:16 PM