Tom Hanks on The Pacific 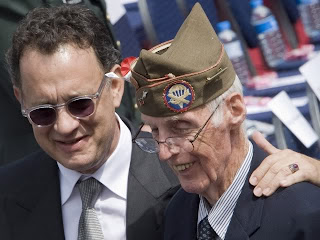 Update: Here's a great guide by the U.S. Naval Institute to The Pacific. Be careful - you can link and surf forever. Massive.

I've been anxiously awaiting the new Tom Hanks/Stephen Spielberg mini-series The Pacific. I hope I'm not disappointed. Consider this from Time's profile of Hanks and the series:

World War II in the European theater was a case of massive armies arrayed against an unambiguous evil. The Pacific war was mainly fought by isolated groups of men and was overlaid by a sense that our foes were fundamentally different from us. In that sense, the war in the Pacific bears a closer relation to the complex war on terrorism the U.S. is waging now, making the new series a trickier prospect but one with potential for more depth and resonance. "Certainly, we wanted to honor U.S. bravery in The Pacific," Hanks says. "But we also wanted to have people say, 'We didn't know our troops did that to Japanese people.' "

I hope he isn't going to draw too close parallels between the War on Terror and the war in the Pacific. It's not the same thing.

Hanks goes on to discuss the difficulty of vets returning to society and he contends that while still very difficult, it was probably easier after WWII, mostly because travel time to get home was slower. That's one of the things in Eugene Sledge's China Marine that touched me; Sledge writes of how difficult it was to resume activities that he had enjoyed prior to the war. Hunting with his father was a definite no-go. The nightmares stuck with him for years. Some habits of survival stayed with him for life.

Back to the politics, Hanks again:

And he is pleased that The Pacific has fulfilled an obligation to our World War II vets. He doesn't see the series as simply eye-opening history. He hopes it offers Americans a chance to ponder the sacrifices of our current soldiers in Iraq and Afghanistan. "From the outset, we wanted to make people wonder how our troops can re-enter society in the first place," Hanks says. "How could they just pick up their lives and get on with the rest of us? Back in World War II, we viewed the Japanese as 'yellow, slant-eyed dogs' that believed in different gods. They were out to kill us because our way of living was different. We, in turn, wanted to annihilate them because they were different. Does that sound familiar, by any chance, to what's going on today?"

This gives me pause. "They were out to kill us because our way of living was different"? Really? I never picked that up in school.

Really, we wanted to annihilate the Japanese because they were different, because we saw them as “yellow, slant-eyed dogs that believed in different gods?” I thought it was due to the fact that “we viewed them” as barbaric imperialists who had attacked us first and wanted to enslave the world.

But there’s no reason to speculate about America’s motivations during WWII because history has proven Hanks wrong. We had every opportunity to annihilate these “different” people. Instead we chose, at great expense, to rebuild Japan and return the sovereignty of that nation over to the “yellow, slant-eyed dogs who believed in different gods.” Or, as most people prefer to call them: our newly liberated allies.

As I understand it, they hit Pearl Harbor not because “our way of living was different” but because they wanted the oil in the south Pacific and needed to neutralize the American fleet before they made their move. I’m also surprised to learn that whereas the Nazis were unambiguous evil, their strategic ally in the far east — whose imperial army utterly terrorized the civilian population of mainland Asia — was merely “different,” much as jihadists are now.

I'll be interested to see in how this plays out in the mini-series. I agree with John Nolte that Hanks probably is a very nice man and his work in bringing America's history to film is impressive. I'd venture to say that most of the students, or boys anyway, at my high school have seen Band of Brothers, but few may have read much on World War II. I think Hanks is contributing something important in making American history accessible to young people. The Pacific will probably do the same thing.

I'll watch The Pacific, all ten hours of it, but I doubt Hanks will convince me that it's the same thing as what we're engaged in now in Iraq and Afghanistan.

Posted by Pat Austin Becker at 7:15 AM

One of the stange things about WWI and WWII is that the troops had no idea as to why they were fighting. A poll taken in WWII indicated that the average GI was clueless as to the purpose of the war. One of the blogs that you have sighted is wrong to a degree in that he left of half of the Japanese story. FDR targete the Japs. He set a stage in the political arena that only allowed an armed attack by the Japs in order for their economy to continue to survive, even for a short period. This might sound inflationary, but it is the same speech that is given by our park service to the Japanese visitors to Pearl Harbor. Another speech is given the the US visitors that is much more patriotic.

"'Certainly, we wanted to honor U.S. bravery in The Pacific,' Hanks says. 'But we also wanted to have people say, "We didn't know our troops did that to Japanese people.""

And I wonder if The Pacific will cover the atrocities committed by the Japanese troops on various peoples-- such as the slaughters in Nanking, Singapore, Manchuria, the Phillipines, the wholesale killing (mostly of the native peoples) during the building of the Burma Railway, the Bataan Death March, regular beatings of POWs, etc. I wonder if they want the audience to say "I didn't know the Japanese troops did that..."

No. Usually Americans are held to a higher standard than others (nothing at all condescending about that, right?).

Comparing the WWII Pacific theater to the modern War on Terror is about as stupid as comparing Native Americans to the samurai (The Last Samurai). Go Hollywood! Please teach us all with Academy Award winning pics like Gladiator and Crash...

There are so many angles on WWII that it's hard to know what the entire story was really. As far as the US vs Japan what I know of the time was Japan was expanding at an exponential rate, population, military ... they were manufacturing planes and weapons and training pilots and fighters 300 times faster than the US. they had claimed part of China, Indonesia and were expanding out claiming land and populations as quickly and brutally as possible to feed a population boom that was unprecendented in Japanese history. What do you do when you have an island with finite resources and space and an exploding population? You need and industry that can support them all, land to put them on, to produce food for them. You go to war. You make war an industry.

Japan attacked the US because we cut them off at the knees and we were trheatening to cut them off even further. We provided steel and materials they needed to run the machinery of war and we told them that if they did not stop invading other lands we would cancel all trade.

Of course they attacked - it was their way at the time. It was how they handled all of their needs. Months before they had entered a treaty with Germany - a pact - that where one country fought, so went the other. Ditto Italy. that back up was all Japan needed to insure victory against a depression ravaged US. For every plane we had Japan had 100. I do not exaggerate those odds. We had nothing compared to Japan when Pearl Harbor was attacked. the odds were so stacked in Japan's favor it's a miracle we were able to get off the floor and get moving.

What we had that Japan did not understand - and the South made this same mistake about the North - was maleable manufacturing capabilities and the ability to ramp up the machinery of war in what must have seemed like the blink of an eye to Japan. We converted nearly every industry over night to make what we needed to provision an instant military.

I was just recently lookikng over the stats of what we had the day before Pearl Harbor vs what Japan had ready. We had virtually nothing.

Back then, every American understood what to do when we were attacked and got to work doing it. Now? Americans think we should shop. 70% of our GDP is essentially shopping. We produce consumers. So. Yeah. Since 9-11 we have been shopping our asses off. It's kind of funny, really. If I were going to write a comparative history it would be the darkest humor. Catch-22 had nothing on the absurdity of modern American war.

The book "Flags of Our Fathers" discusses some of the atrocities committed by the Japanese soldiers in their conquering of Asia, especially China.

One of the things that I read that sticks in my mind was how they would throw babies in the air to see how many they could skew onto their bayonets.

I don't understand how a person who didn't live, and I'm one, in the time when there wasn't hardly a family not affected by the war can say how horrible the United States was for using the atomic bomb to end it.

Truman would have been negligent not to have used the bomb and allowed millions of Americans and Japanese lives to be spared compared the approximate 200,000 who perished in Hiroshima and Nagasaki.

I am inclined to believe "The Pacific" will not be politically slanted, or at least I too hope not.

"Band of Brothers" had no political slant and neither did "Saving Private Ryan". From my understanding Tom Hanks' desire is to get the story of WWII veterans out before the men and women who fought the war are all gone.

I remember talking to the WWII veterans back when I was a kid, and it was because of them I decided to go into the military. I remember, when I was really young and full of naive bravado, telling a WWII that I would gladly go to war. He looked at me and said, "I hope you never do."

@ G.R. i imagine it's not because they were just being bigoted. There are two sides to every story. In our attempts to be politically correct we have steam-rolled over a person's ability and right to express dislike, disdain, or flat-out rejection for any myriad of reasons. There is something to be said in defense of experience versus blind acceptance of generalities. That in itself is ironic.

You're so right. Because of the what those people experienced, they earned the right, and political correctness be damned, to have hatred.

But political correctness is equivalent to a child sticking his fingers in his ears and loudly yelling ""LA LA LA LA LA!" to keep from hear something he doesn't want to hear: the truth.