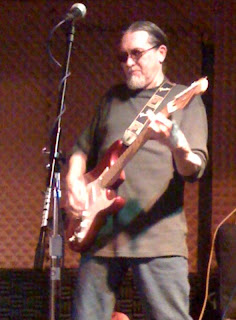 Another weekend is upon us and once again we have lovely spring weather today. Last night Steve and I went to The Blind Tiger for burgers. About halfway through dinner I get a text from my brother. He said our friend Jimmy Day was playing at one of the casinos; he was on his way there if I wanted to meet him. Since it was only a block from where we were, we all hooked up and spent the evening listening to some great music.

Jimmy Day is well known around Shreveport music circles, and Shreveport is known for its rich musical roots. Jimmy is named for his dad, Jimmy Day, who was one of the best steel guitarists of his time and has played with more famous names than you can come up with, including Willie Nelson and Elvis. He is known also for his tinkering with the pedal steel guitar. He was inducted into the International Steel Guitar Hall of Fame in 1982. Scroll to the bottom to see video of Jimmy Sr. at the International Steel Guitar Convention. Here's a link to another one that I couldn't embed but like better.

His son Jimmy is no less talented. Raised with a guitar in his hand, he's a masterful guitar player and we catch him whenever we can. In fact, if you're in the Shreveport area, catch Jimmy and the band at The Tiki Room on March 20. Maybe he'll play some Eric Clapton for you! We'll be there.

As for today, I've got the spring cleaning bug and have the urge to go through and throw things away. Yard work needs to be done; things are beginning to bloom and turn green. Potting soil must be bought and seeds must be sown. And none of that will get done unless I get on to the linkage.

First we have to say goodbye to a blog this week. Red is retiring Caught Him With a Corndog. Stop by her place and say goodbye if you've been a fan of her blog. I've invited her to do guest posts here should she feel the need to rant and rave every once in a while, or maybe she'll start another blog, but I'll miss her wit and her unique way of looking at things!

Fishersville Mike is already planning the repeal of Obamacare. I'm still optimistic that it won't get that far.

Ruby Slippers takes aim at the lie that is Obamacare and quotes Peggy Noonan.

Troglopundit is studying up on reconciliation.

Cynthia Yockey's ambition and plans are sort of energizing. I need to start a list.

Bob Belvedere writes a great post on fighting Obamacare and bestows the ultimate compliment on me - he called me a true Wolverine! Yeah, baby!

Carol's sheep are going to the Oscars!

Smitty does an excellent smack-down of David Brooks at The Other McCain.

Bride of Rove still loves her Kindle and is sad that Glenn Beck hates his. I'm still trying it on my iPhone, but so far, not feelin' the love.

Now I've got to get my Saturday things done and the first is trying to figure out why The Teenager thought drinking my last Diet Coke was a smart thing to do.

Posted by Pat Austin Becker at 7:27 AM

I got it on the iPhone. It's just not the same.