America is a Center-Right Nation - Has Obama Forgotten That? 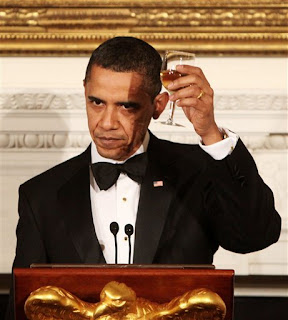 There is much in the news this morning about the faltering Obama agenda. There is this Washington post story about Obama's falling approval ratings, this AP story regarding Obama's stall tactic in releasing his budget update, news that the nation's governors have concerns over the health care legislation, reports of the stimulus money being squandered, and now more news on the IG investigations. It can't be a happy Monday in the White House.

Fred Barnes points to the errors of the stimulus legislation as part of Obama's problems. It was passed too quickly. Nobody read it. It was crafted behind closed doors. Barnes calls it a "rookie mistake" for Obama to have let the congressional Democrats run that show.

And now the 2010 elections are beginning to loom.

Robert Stacy McCain has a piece at American Spectator on the progress of the Inspectors General Investigaton; he says:

"Timing is very important in politics, and both Republicans and Democrats are beginning to look ahead to the 2010 mid-term elections. Projections of double-digit unemployment and mushrooming deficits are already causing some Democratic jitters. The questions being asked about the IG investigations and Obama's promises of 'transparency' now dangle like a sword of Damocles above the heads of Democrats on the Hill."

Obama's rush to ram through as much of his liberal social agenda as fast as he can has always seemed suspect to me. Presidents usually take advantage of that "honeymoon" period to enact their policies, but Obama's policies have been such a radical departure from what we know to be American values, that people are beginning to get skittish.

Sure, he still has plenty of support and his numbers are not in the cellar. He's still relatively popular. But 22% of the moderate and conservative Democrats now see him as an old-fashioned "tax and spend Democrat," up from 4% in March, according to the Washington Post-ABC News poll.

John Meacham, writing for Newsweek in October 2008, said that America is still a center- right nation, a fact that Obama should not forget. It may have come to that. People may be beginning to get the jumps at the idea of socialized health care, bailouts, frigtening deficit projections, radical cap and trade legislation proposals, and the practice of transparency only when it suits the White House; why are we spending $18 million to revamp the Recovery.gov website?

Obama is pushing back on health care reform now by going on what Fox is calling a "blitz" to get health care reform passed before the August recess. What's the rush? Shouldn't something that important and something that affects so many Americans move more cautiously? Must we pass yet another critical piece of legislation in a rapid-fire way? Or is it that in Washington only the investigations move slowly while the legislation is quick?

The polls show that Americans are beginning to develop concerns about the Obama agenda. As more and more people lose jobs ("the stimulus has done its job!") and unemployment rises, as people continue to lose their homes, as the deficit grows and spending in Washington continues, people will notice and Obama's numbers will continue to fall. He'll retain some popularity of course, but the scope is changing. There is a shift underway.

As Obama heads off to Martha's Vineyard on vacation next month, he might revisit his agenda and consider those words of Meacham who said that "America a nation that is more instinctively conservative than it is liberal—a perennial reality that past Democratic presidents have ignored at their peril."
Posted by Pat Austin Becker at 11:19 AM

This "president" disgusts me beyond words. Truly.

America is most certainly NOT a center-right nation.
What is right, or left? Where is the center? What do those words mean?

The center of the political spectrum is, BY DEFINITION, where the central tendency of the American people is.

America is a centrist nation, by definition. From time to time various political movements that have their own centers of gravity on the right or the left, manage to capture the imagination of a (usually slight) majority, and the policies of the government become center-right, or center-left. The people will give the right or the left the chance to run things for a while, but the country remains centrist.

We are now in a time when the left has its opportunity to govern, as a result of the holy mess that the right made of everything when they were given a chance.

You are telling yourself silly fairy tales with this center-right nation nonsense. As if somehow the people were with you, even though the people have spoken, quite clearly, in two elections now, that they utterly reject your party, your ideology and your ideas.

most people are decent, go to work everyday, love their kids, help their parents, enjoy weekends and a beer now and then. most people do not condone the suctioning of late term fetuses, letting men merry men or women marry women, giving terrorists and illegal immigrants more rights than United States citizens, letting the government control their every aspect of life, and submitting to socialism because it's just so darn "wonderful". Sorry, this IS NOT what America is all about. we have a constitution, and we need to adhere to it. Good values never go out of style. And substance will always trump being "cool". obama was elected because he was cool.

Anon: "America is most certainly NOT a center-right nation.
What is right, or left? Where is the center? What do those words mean?

"The center of the political spectrum is, BY DEFINITION, where the central tendency of the American people is."

*snicker* I enjoyed your govt. as a wobbly spinning top theory. Very funny.

Left, center, and right are not concepts that are merely defined by American whim. Are you suggesting that Lenin, Stalin, Mao, and Pol Pot were eventually centrists as their countries adapted to their politics? Funny. How about Franco and Mussolini? Eventually centrists?

Without defining the left and right, you cannot determine what the center is, nor where the govt. is within these boundries. And the center exists at a halfway point between left's and right's competing theories, not where the majority of the citizens want it to be.

Of course it is especially amusing as you seem to deny that there is a center and then claim that the center is where the majority belive it to be as if these concepts were dependant upon the majority view. Funny. Both reality and political reality are divorced from popularity.