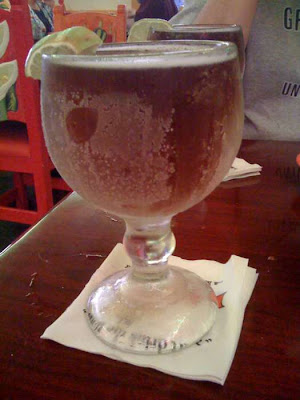 Because it's so hot outside, settle in, have a cold beer (it's a Dos Equis), and hit some linkage. (Hey Smitty, does that count for Rule 5?!)

Carol at No Sheeples Here has me as her spotlight of the week! I love her! Seriously, nobody does a Saturday Round Up like she does. Plus she had a great post this week on the Obama's upcoming vacation AND she spit on Alec Baldwin!

Bride of Rove would LIKE to spit on Alec Baldwin. AND Kathleen Turner.

Professor Jacobson wouldn't spit on anybody but he does put Judith Warner in her place.

Yukio at Critical Narrative also has a great round-up.

Carol's Closet has a lovely take down of Steny Hoyer; have you heard? He thinks actually READING bills is hilarious. The Daley Gator, in response, starts the Congressional Literacy Project; I'm in!

Yourish makes note of the fact that Obama doesn't really like Israel all that much. Criminal, really.

The News Factor is an online conservative magazine which picked up my Waxman is Off the Mark post. There's some other cool stuff there, too. The Conservative Political Report picked it up, too.

Political Byline really, REALLY liked Peggy Noonan's down-with-Palin article this week. He also sets the record straight on that Obama photo. Also, with an opposing view on Palin is the post by Cynthia Yockey.

This Ain't Hell has a gloomy, but interesting look into the future! So does Doug Ross whom I adore because he's thrown me a zillion hits this week! Doug shows us everything from cars to toilets in 2016.

Gateway Pundit points out Obama's kooky science czar. Kooky isn't even the word for it, folks. Pundit and Pundette weighs in on this kook too with some Horror Stories. Hyscience also has a great post on this guy.

Sippican Cottage has a BEAUTIFUL clip of my man Eric Clapton!

Donald Douglas has a fascinating post on A Nuclear Free World.

Is Stacy McCain starting rumours? Maybe, but as long as he keeps writing stuff like this, I don't care.

Fishersville Mike has some blogging advice. I need all the advice I can get because I'm still a long way from a million hits and my one year anniversary is coming up next month.

Snaggletoothie makes note of the Chicago Way in Washington. Plus, it's always worth a stop by his site to see the ever changing pictures at the top! And the ones at the bottom!

Troglopundit had a busy week keeping up with posting all the links mailed to him. No way I can keep up with Donald, Trog. Can't do it.

Jordan at Generation Patriot has a plan for feminism.

My Bossier reports on Pelosi shutting down the Michael Jackson resolution. Thank goodness.

Jimmie at The Sundries Shack sent me a bunch of hits this week through his American Issues Post on cap and trade. His AIP post was fabulous and you need to read it.

Caught Him With a Corndog has a brief post on Canadian health care you should look at.

The Vegas Art Guy has some decorating issues. See what you think and lend advice!

Not One Red Cent reports on a challenger for Waxman! Oh happy day!

Left Coast Rebel has an excellent write-up of the state of things in the state of California. He's got a wonderful blog and if you aren't checking it out often, you're missing something.

Sarah, at Women of the GOP, profiles Michelle Bachmann, the GOP's Second Most Hated Woman. (Gee, who is the first?)

Betsy's Page notes that the stimulus wasn't supposed to work by now. But of course, nobody in the administration can get their story straight on that, which would help. Sort of.

Okay, that's all for now. Have a great Saturday! Hope it's cooler where you are than where I am.
Posted by Pat Austin Becker at 8:49 AM