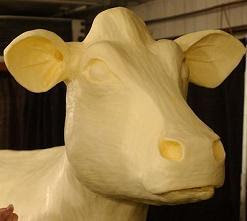 Oh dear. There will be no butter-Michael at the Iowa State Fair:

Jesus Christ and his apostles made the cut. So did John Wayne, Elvis and Tiger. But Michael Jackson will not have his buttery likeness displayed at the Iowa State Fair in Des Moines this summer, after support for a creamy statue of the King of Pop melted in an online vote.

Kent Lehs, a manager with the Midwest Dairy Association, which sponsors the display, said Friday it wasn't a question of Jackson's achievements that drew complaints.

"They were more pointed toward what they felt they understand Michael Jackson's reputation was and not as a singer and dancer, but more some of the things he was implicated on in his personal life," said Lehs.

Fair spokeswoman Lori Chappell said more than 100,000 votes were cast and by a 65 percent to 35 percent margin, people rejected the Jackson sculpture. Voters were asked to include a ZIP code, and 97 percent of those submitted were from Iowa, she said.

But the butter cow will still be there!

Previously:
Buttery-Michael May Not Make it After All!
Michael Jackson in Butter?
Posted by Pat Austin Becker at 12:30 PM

I'm really kinda glad, the idea of that just creeped me out!