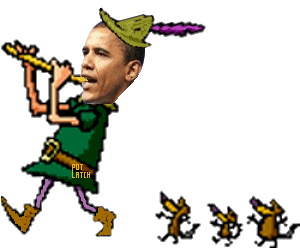 Update: Welcome Michelle Malkin readers! Look around, as long as you're here!

Via My Bossier, Congressman Fleming has proposed a Resolution which states that members of Congress must also participate in whatever health care plan they choose for the rest of us:

Under the current draft of the Democrat healthcare legislation, members of Congress are curiously exempt from the government-run health care option, keeping their existing health plans and services on Capitol Hill. If Members of Congress believe so strongly that government-run health care is the best solution for hard working American families, I think it only fitting that Americans see them lead the way. Public servants should always be accountable and responsible for what they are advocating, and I challenge the American people to demand this from their representatives.

If you agree with me, sign our online petition below and together we will work to ensure that any plan that is good enough is for American families is good enough for every member of Congress.

It IS curious that they would exempt themselves from the plan, no? Why is that, do you think? Not good enough?

Dear Leader can't be happy today. His health care plan has been shelved "until further notice" as Blue Dog Democrats stand against it, and just yesterday Cap 'n Tax got shelved until at least September.

Jim Geraghty at NRO points out that "if you juggle too many plates at once, sooner or later one or more comes crashing to the floor." Colin Powell had the same sentiment when he said last week, "I think one of the cautions that has to be given to the president -- and I've talked to some of his people about this -- is that you can't have so many things on the table that you can't absorb it all," he said. "And we can't pay for it all."

One has to wonder about Obama's overly ambitious agenda. Is he attempting to accomplish as much as he can while he has the support of a Democratic Congress? With his approval numbers dropping (although is overall numbers are still pretty good), possibly he is beginning to feel the heat?

Victor Davis Hanson has a piece this morning that suggests voters are beginning to understand that our President does in fact have flaws and simply cannot go around constantly apologizing for American sins, spending like a drunken sailor, blaming the previous administration for EVERYthing, take no personal responsiblity for ANYthing, and continually operate on the principal that "the ends justify the means."

It might be time for Obama to slow down and rethink his game plan and his outlook. I don't think that will happen, quite honestly. His normal practice has been the arm-twisting Chicago way and it is possible that his being out of the country and preoccupied with foreign affairs has left him unable this week to wrangle these initiatives through. That's our good fortune. I've never seen Obama admit at mistake, either. He blames someone else or feigns ignorance ("I never knew Reverend Wright to be like that! That's not the man I knew!")

[Dr. Orrin] Devinsky asked the president pointedly if he would be willing to promise that he wouldn't seek such extraordinary help for his wife or daughters if they became sick and the public plan he's proposing limited the tests or treatment they can get. The president refused to make such a pledge, though he allowed that if "it's my family member, if it's my wife, if it's my children, if it's my grandmother, I always want them to get the very best care.

Related Posts:
Starting to Look at the Obamacare Bill
John Boehner Says the Republicans Have a Better Plan
"Say Hello to My Little Friend!"
Take a Look at Obamacare
Going Galt Over Obamacare

I pray for COMMON SENSE to prevail!

You know, I think requiring Congress to participate in whatever public option they propose isn't a bad idea. But I'm not signing any petition associated with any blogger who is *still* whining about Rev. Wright and using tired clichés like the "Chicago way," etc. Seriously, it just makes you look foolish and totally undercuts any credibility.

According to the arguments I've heard, their healthcare should already be terrible since it's "socialist gov't healthcare!1!1!!"

...of course you all realize that the inmates are now running the asylum.....

Is this guy seriously still complaining about the "Chicago Way"?

I almost stopped reading right there. Next think I know he'll start asking for a birth certificate.

Get over it man. You lost and America won.

Boglee, Ahoy you former drunken Squid! I wasn't a drunken sailor, but I was at times a drunken dog face. If we were to ever meet, I would like to buy you a drink. Unlike the liberals, since I promised to deliver, I will use my money and not yours or anyone else's money to fulfill that promise.

As for the last Anonymous, from his comments, I think I will buy him his drink of choice: Kool Aid.

While I agree with the proposed legislation, I also want them to pay for it. After all even retired military are paying for something they were told would be provided for. Again the government broke a contract with the only ones in recent history to defend their freedoms, the MILITARY.

Fleming is a liar and so are Price and Coburn.

US health care is the most expensive in the industrialized world and it is the lowest quality. Those are the facts. Anyone who say differently is either a liar or a fool.

Tell the lemmings the truth!