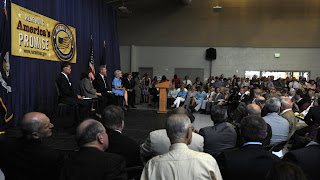 "It will be a cold day in hell before he socializes my country," so said one spectator in Reserve, Louisiana yesterday.

NOLA.com has a report this morning on the Obamacare meeting in Reserve. It was a standing room only crowd inside with about 400 people; there were also anti-government-funded-abortion protesters outside.

I found this quote rather ominous - maybe it's just my paranoia [emphasis mine]:

"Sebelius said the House health care reform bill and the Senate Health Committee bills don't define the benefit packages that would be available under a revamped health delivery system. A team of health care providers will recommend what would be covered, she said. 'I think it would be wise to let science guide what the best health care package is,' she said."

The Advocate quotes Sebelius in response to a question about whether or not members of Congress would have to sign up for Obamacare: "Sebelius said the proposals do not dismantle coverage plans, which would include the congressional plan, but give a choice to people who are under-insured or uninsured." She probably needs to go back and read the current version of the bill. This has been proven to be misinformation - see here and here.

She continunes to quote the 47 million are uninsured meme which is a misleading figure as Sally Pipes of the Pacific Research Institute has explained:

Of course, 12 million illegals will be able to obtain coverage under Obamacare.

Senator Mary Landrieu was at the meeting and "told the crowd she understands the debate and strong feelings on both sides. She added, though, that as it stands now, the health care system in America is good for some, but not for everyone. 'All of us, all of us have an obligation in America to think about the kind of health care system that we want. Are we happy with the way the system is now? Some people think parts of it are good, but most people think that it could be changed to be better.'"

Senator David Vitter was also there and spoke to the media about the expense of the plan.

The Dead Pelican has this footage of the meeting which pretty much sums it all up:


Related posts:
"You WILL Lose Your Current Insurance"
Obamacare for Illegals
Melt the Phones!
No More Private Insurance with Obamacare
A Picture is Worth $245 Billion
Starting to Look at the Obamacare Bill
John Boehner Says the Republicans Have a Better Plan
"Say Hello to My Little Friend!"
Take a Look at Obamacare
Going Galt Over Obamacare
Congressman Fleming: What's Good for the Goose.

I better get on the ball or I'll never get to have a baby!