How Not to Get Arrested 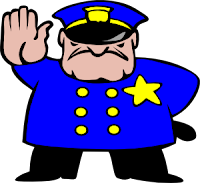 The Corner has this from an LA PD officer. He's spot on.

"So, since the president is keen on offering instruction, here is what I would advise he teach his Ivy League pals, and anyone else who may find himself unexpectedly confronted by a police officer: You may be as pure as the driven snow itself, but you have no idea what horrible crime that police officer might suspect you of committing.

You may be tooling along on a Sunday drive in your 1932 Hupmobile when, quite unknown to you, someone else in a 1932 Hupmobile knocks off the nearby Piggly Wiggly. A passing police officer sees you and, asking himself how many 1932 Hupmobiles can there be around here, pulls you over. At that moment I can assure you the officer is not all that concerned with trying not to offend you. He is instead concerned with protecting his mortal hide from having holes placed in it where God did not intend.

And you, if in asserting your constitutional right to be free from unlawful search and seizure fail to do as the officer asks, run the risk of having such holes placed in your own. When the officer has satisfied himself that it was not you and your Hupmobile that were involved in the Piggly Wiggly heist, he owes you an explanation for the stop and an apology for the inconvenience, but if you’re running your mouth about your rights and your history of oppression and what have you, you’re likely to get neither."

I think it's really time to move on from this one, but I've got to say that what I heard Obama say on Friday at the press briefing did not sound like an apology to the police officers of America that he offended by accusing them racial profiling. I don't know what he said to Crowley in their phone conversation, but if Crowley accepts it as an apology, then that's good enough for me.

As for Gates, he's a blowhard idgit. Clueless.

Has Obama apologized to the doctors yet that he insulted in that same speech? If he has, I've missed it.
Posted by Pat Austin Becker at 12:27 PM

Obama only apologizes for the acts of others.

Do you not find this rant from the cop to be deeply offensive to American values? This guy is a psycho. Have you forgotten that this country was founded on resistance to government tyranny - and this cop is the embodiment of such tyranny. He threatens to shoot us if we are not compliant little sheep in his presence????
His are the values of the police state. And you support this?????

It's common knowledge that Jack Dunphy is Mark Furman.