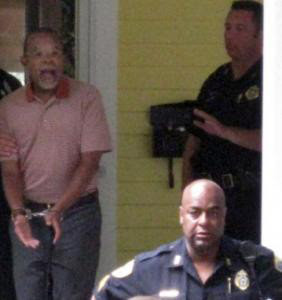 Anything that Obama said about health care last night, which as it turns out, wasn't anything new, has quickly been lost in the kerfuffle over his remarks on the Gates arrest. The entries on Memeorandum regarding Obama's entry into the race debate widely outnumber the posts on the rest of his speech.

This is what Obama said that has raised the controversy:

“Now, I don’t know, not having been there and not seeing all the facts, what role race played in that, but I think it’s fair to say, number one, any of us would be pretty angry; number two, that the Cambridge police acted stupidly in arresting somebody when there was already proof that they were in their own home; and, number three, what I think we know, separate and apart from this incident, is that there is a long history in this country of African-Americans and Latinos being stopped by law enforcement disproportionately. And that’s just a fact.” He added later that the incident was “a sign of how race remains a factor in this society.”

There are some points I agree with in the commentary that has followed.

First is the opinion of Ed Morrissey when he says that "any statement from a politician about an incident under dispute that begins, ' I don’t know, not having been there and not seeing all the facts,' should end with, 'I have nothing to say until all the facts are known.'" Yet, having said he didn't have all the facts, Obama proceeded to say that the Cambridge police "acted stupidly."

Rich Lowry adds this: "In this famous snapshot of the arrest, there's a black cop prominently in the foreground. Doesn't that vitiate somewhat the idea that this was a flatly racist arrest?"

On the other hand, Jim Geraghty wonders this: "I am not so certain that yelling at cops is ipso facto a crime. With the charges dropped, we have to wonder just how disorderly his conduct was..."

The charges on the police report were "disorderly conduct," which seem to be supported by witness statements. (The more detailed report is here, in which he reports Gates as saying "I'll speak to your mama outside!")

The police officers responded to a possible burglary call. Mr. Gates was certainly obnoxious, but is it a crime?

My two cents on police officers: they put their lives on the line for the general public every single day. In many cases, not all, but often, they are met with verbal abuse, derision, and disrespect. They have to endure things that most of us wouldn't tolerate for five seconds. Their job is incredibly stressful, dangerous, under appreciated and under paid. Are there some bad cops? Of course. Should some have chosen a different profession? Sure. You get that in any occupation.

But for the President of the United States to weigh in on national television about a local arrest is simply incredible. Even more so once he says he doesn't have all the facts and that the man arrested is a friend of his.

Now this case will be tried in the media. Never mind that the charges have been dropped. The character of the officers will be dissected. The officer in question will have this shadowing his career forever, as if he is somehow guilty of something regardless of the outcome. Would Mr. Gates file a civil suit on the police department?

The White House is now backing off the statment, with Robert Gibbs saying "that Obama did not regret the remark, but wanted to clarify that he was not calling the arresting officer stupid."

Not much difference, Mr. President. Not much.
Posted by Pat Austin Becker at 12:41 PM

Is there any doubt Gates will sue the police, and probably the city of Cambridge as well? The only reason he wouldn't is if too many of his own words would be brought into the light, or if the White House pressures Gates not to sue after this debacle.

This is totally off the wall, but on the police report under 'ethnicity' it said 'not of Hispanic origin'.
I wonder what that was about?

Linked you. I'm calling it Crowley-quiddick.

That's exactly what "ethnicity" is defined as nowadays - either "Hispanic" or "non-Hispanic". Nope, no "Greek", "Hungarian", "Polish", etc.

Any other sort of identifiable origin (Polynesian, Chinese, black (or whatever is the currently PC euphemism)) is in the "race" category.

Obama's Harvard friend denigrates the mother of the only guy there with a gun. Yet Obama calls the cop stupid.

And Obama is now considered the chief law enforcement officer of the nation?
This is the guy who just had to stand in front of a bunch of cops to make a speech during his campaign as to how he will support them
One more lie to the many he told.
Most politicians will say one thing in one town and say one thing in the next town hoping the people won't catch on. This clown will literally say one thing one minute and contradict himself, if not in the same sentence, the same paragraph.

Now, Barack the Clown is a law enforcement expert. He is telling the police when they should handcuff a person they have in custody. GOLLY! He knows everything!