Buttery Michael May Not Go to Iowa After All 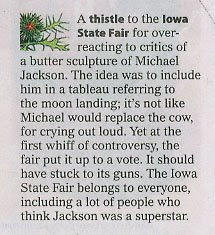 Things are not peachy in Iowa over the proposed Michael Jackson butter sculpture planned for the Iowa State Fair. The annual butter cow was to be joined this year by a butter Michael Jackson in commemoration of the Moonwalk.

Under pressure and disparaging comments, the Iowa State Fair is now putting the issue to a vote.

"The overwhelming response is a testament to how important the Iowa State Fair is to Iowans and to the iconic nature of Iowa's butter cow," says Gary Slater, Iowa State Fair CEO/Manager." However, the ongoing discussion has created a lot of, well, 'churn,'" he adds. "Since everyone has an opinion about the sculpture, we've decided to put it to a vote and let Fairgoers decide."

The Iowa State Fair site puts it this way:

"The concept of the sculpture will be a celebration of the 40th anniversary of Neil Armstrong’s moonwalk on July 20, 1969. In honor of Armstrong’s “giant leap for mankind,” this year’s sculpture will include an astronaut, an American flag and a buttery rendition of the surface of the moon. Depending on the vote, Michael Jackson would be featured in a small side portion of the sculpture as the first pop-star to perfect and popularize choreographed moonwalking. "

Never one to back away from a good controversy, PETA weighs in with this request:

"Making the statue out of cruel and unhealthy dairy products is simply a 'bad' idea. In honor of Michael's concern for kids' health, please use dairy-free butter for the statue--we're sure you'll find that you can't 'beat it."'

I was unhappy about so much media coverage and did not understand the adulation of Michael Jackson. That is one thing, a butter sculpture is something else. The people who run the fair should tell anyone protesting it (especially PETA) to get over it.

Hey everybody, you've got to click on the letter from PETA. Then you will see the logic of the people on the left who is slowing taking control of the government of the United States.
If it weren't so damned sad as to what is actually taking place in this country, the letter you be absolutely hysterical!

This passage was a gem. "In tribute to his (referring to M.J.) passion, please don't promote artery-clogging dairy products to children by using butter for the statue. Instead, we suggest that you use dairy-free Earth Balance, a healthier "buttery" spread, or another vegan butter alternative."....Tracy Reiman Executive Vice President (PETA).

I think I know why a lot of conservatives loose out in debates with those on the looney left. Most clear thinking people aren't fluent in stupidity like Tracie Reiman and her ilk.