Time for Obama to Back Up and Regroup 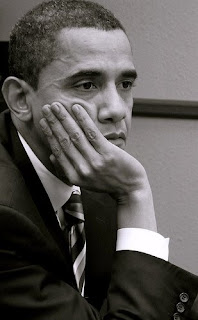 Support for Obamacare is plummeting, not that it was ever that great in the first place, and the frustration of the American people is rising. Randy's Right has pictures and video of Obama's arrival in Raleigh yesterday for his town hall meeting. It's not pretty. Go watch the reception they gave the motorcade in Raleigh. There were also some Moveon.org agitators there, he has video of that as well, and to their credit, local law enforcement did allow protesters to talk to each other, unlike the incident in Baton Rouge last week.

The New York Times reports falling support for Obamacare: "Americans are concerned that revamping the health care system would reduce the quality of their care, increase their out-of-pocket health costs and tax bills, and limit their options in choosing doctors, treatments and tests, the poll found. The percentage who describe health care costs as a serious threat to the American economy — a central argument made by Mr. Obama — has dropped over the past month."

The Wall Street Journal posts these poll results: "In mid-June, respondents were evenly divided when asked whether they thought Mr. Obama's health plan was a good or bad idea. In the new poll, conducted July 24-27, 42% called it a bad idea while 36% said it was a good idea." The full poll results are here.

Americans have had enough. We are just over six months into this presidency and people have had enough. Porkulus, Omnibus, the over-the-top budget, Government Motors, Cap and Tax, Obamacare.... Obama still has plenty of support, of course, and he has a majority in the House and Senate, but protestors are coming out in ways I haven't seen in a long time.

This started with the Tax Day Tea Parties; many liberals and media pundits were stunned at the widespread, often spontaneous, grassroots explosion of protests against the direction of the government. Many did not "get" what we were protesting about in April. That was right after the Porkulus bill with its 9000 earmarks was passed with nary a glace by any Congressman, thus putting our children and grandchildren on the hook for years of deficit and debt. Generational theft. There were protests in over 750 cities that day with most estimates agreeing that over 300,000 people participated.

The protests have not stopped. July 4 saw many protests throughout the country. In addition to celebrating our nation's freedoms, we also protested and lamented at the loss of liberty our government is enacting. Liberals derided the protests trying to paint them as ignorant and simply being about taxes. It's about so much more than that.

Mark Levin's book, Liberty and Tyranny, remained at the top of best seller lists for weeks. Currently that post is held by Michelle Malkin's new book, Culture of Corruption (on Amazon, at least).

The protest in Raleigh yesterday is indicative of what many people throughout the country are feeling about Washington these days, and we are coming out, speaking up, and voicing our displeasure in ways that we have not done in years.

Obama's response to the protests have been typical. After the tax day Tea Parties, he said, "So, you know, when you see — those of you who are watching certain news channels on which I'm not very popular and you see folks waving tea bags around, let me just remind them that I am happy to have a serious conversation about how we are going to cut our health care costs down over the long term, how we're going to stabilize Social Security."

People are not just "waving tea bags around" and his flip response to the issue indicates how out of touch he is with what most Americans want. Half of the country did not vote for him, and he has shown no interest in courting that half of the country. To hell with 'em.

In June, protests against the Cap and Tax bill crashed the Capitol switchboard. Americans are speaking up. We're not just waving tea bags. We're writing and calling our Senators and our Congressmen. We're lining the streets in protest. We're making signs to voice our displeasure. We're organizing letter writing campaigns. People who have never been actively involved in politics before are now paying attention.

This new focus is reflected in the decline of Obama's popularity in the polls. The new Pew poll reports that "Barack Obama’s approval ratings have suffered major declines. The president’s overall job approval number fell from 61% in mid-June to 54% currently. His approval ratings for handling the economy and the federal budget deficit have also fallen sharply, tumbling to 38% and 32%, respectively. Majorities now say they disapprove of the way the president is handling these two issues. The new poll also finds significant declines over the last few months in the percentage of Americans giving Obama high marks for dealing with health care, foreign policy and tax policy. "

It is indeed time for Obama to take a vacation. I'm not expecting his politics to change any when he returns; he has a socialist's heart. I wouldn't recommend going back to Raleigh, but I hope he takes long walks along the beach at Martha's Vineyard, watches a few sunsets, has a beer or two, and reads some good American history. I could make some recommendations. He needs to get a better grip on what made this country great and quit apologizing for it or trying to remake it. Americans have had enough.

(Much more at Memeorandum)
Posted by Pat Austin Becker at 10:41 AM