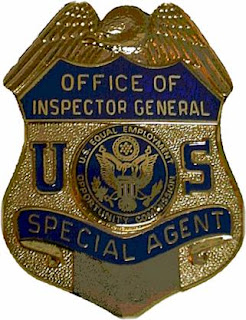 Robert Stacy McCain has an update this morning on the Inspector's General scandal in his American Spectator article. Things are moving along and the investigation is still ongoing, but it's not a "full-blown" inquiry just yet:

"We're not there yet," one Democratic source on Capitol Hill said last week, when asked about the prospect for hearings on the Obama administration's firing of AmeriCorps inspector general Gerald Walpin. Congressional investigators are still conducting interviews in the case, so the question of whether to "pull the trigger" on a full-blown inquiry -- with subpoenas for witnesses to testify under oath at committee hearings -- has yet to be decided.

The "yet to be decided" phrase could be misleading in that some might assume this misdeeds here aren't serious enough to merit such an investigation, but as McCain points out, it's a sensitive, bipartisan investigation. When the President of the United States is involved in the firing of an Inspector General for the purpose of covering up for a political ally, one tends to tread carefully.

There is no question that the Obama administration is trying to muzzle and gain control over the Inspectors General. This story focuses on several fronts besides Walpin, as McCain explains.

USA Today has an article on the Amtrak angle of it:

Amtrak managers have improperly interfered with oversight of the railroad's $1.3 billion in economic stimulus funding, according to an independent report by a former federal prosecutor.

The report commissioned by Amtrak's former inspector general says the railroad's lawyers and financial managers interfered with the internal watchdog's ability to get stimulus-related documents and the $5 million Congress appropriated for stimulus oversight.

Note the phrase "former inspector general." That would be Fred Wiederhold who suddenly and unexpectedly retired immediately after meeting with the Amtrak board in June. Wiederhold does not say he was forced to retire, for the record.

And lets remember that Joe Biden's son, Hunter, was on the Amtrak board from July 2007 to February 2009.

The "most transparent administration" in history seems to have some explaining to do.

See Also:
IG-Gate: Chugging Along, The Other McCain
Posted by Pat Austin Becker at 10:50 AM