Sarah Speaks on Cap and Trade 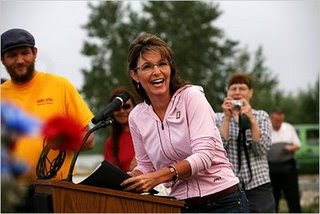 Sarah Palin makes some valid points in her article on Cap and Trade in the Washington Post today. One of them has nothing much to do with Cap and Trade. She says that "many in the national media would rather focus on the personality-driven political gossip of the day than on the gravity of these challenges."

No argument there. The Michael Jackson extravaganza is evidence of that. The media, and our culture in general, as we all know is obsessed with celebrity.

She makes another valid point when she says that "Job losses are so certain" under cap and trade that the bill "includes a provision accommodating newly unemployed workers from the resulting dried-up energy sector." If this bill is to create "jobs, jobs, jobs, jobs" as Nancy Pelosi said, why are we allocating $4.2 billion over eight years to compensate people that will lose their jobs because of it?

And if it's so wonderful and going to do all these great things for energy, why are we going to give lower income families (that would be those making about $35,000 per year for a family of 4) direct deposits each month to offset their energy costs?

As Palin also points, out, everything else will go up in cost besides energy. Farming, grocery prices, manufacturing, warehousing, transportation, and many of those businesses will fold. It's a domino effect.

While Palin is correct to be concerned about this bill, and I certainly am, we also need to be concerned about what "the other hand" is doing, as Glenn Beck might say. We're all focuses on Sotomayor, on Waxman-Markey, and on our celebrity goings-on, but watch out for that health care bill coming at you later today. It's gonna be a doosie.

See also: The American Issues Project
Posted by Pat Austin Becker at 11:49 AM

I'm hip to their game. I'm all over that healthcare issue no matter how long CNN and their ilk decide to drag out the Michael Jackson memorial.