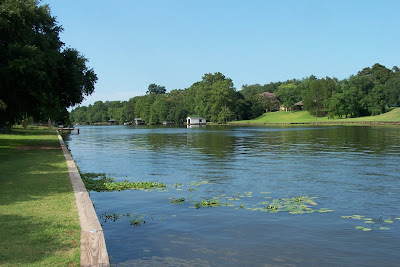 Steve and I have returned from Natchitoches. It was a fun 24 hours and really a lovely town. It's only about an hour from here and we like to get out of town every so often and go down there, or sometimes to Jefferson, Texas; both are quaint and historic little towns.

We stayed at The Church Street Inn Saturday night. It was originally a bank, built in 1961, and has been converted to a 20 room hotel. It's furnished with reproduction antiques and is right in the middle of the historic district, so we could just park our car and leave it for the weekend. Everything else we wanted to do was in walking distance. 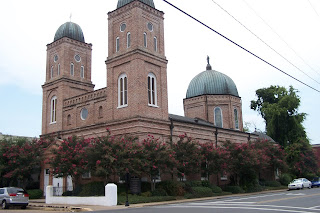 We started off with lunch at Lasyone's - their famous Natchitoches meat pies. We can't go to Natchitoches without going to Lasyone's.

From there we went across the street to the Church of the Immaculate Conception, a beautiful Catholic church which was built from 1857-1892. There are two graves in the church; one is 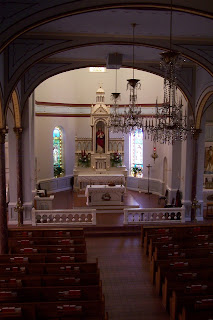 Bishop Augustus Aloysus Martin and the other is his first Vicar General. The church is beautiful and has been recently restored.

When we arrived there were a couple of people there putting flowers on the altar for Sunday's service and they told us that the church has recently been named a Minor Basilica by Pope Benedict XVI which gives the church a direct connection with Rome. A church can be named a Minor Basilica only when it has extra historical and spiritual significance. There are 56 minor basilicas in the U.S. and the only other one in Louisiana is St. Louis Cathedral in New Orleans.

We also visited the gift shop next door to the church and visited for a while with a friendly woman who worked there. She gave us a copy of the newspaper article about the church's new designation and I bought a refrigerator magnet.

Our next stop was the Kaffie-Frederick Hardware store. It's the oldest operating general store in Louisiana and has everything under the sun in there. Right inside the door was an old cooler filled with Cokes (the green bottles!) and an "honor system" money box. We bought two.

Local watercolorist Grady Harper was there with an exhibition; he was working on a new piece using coffee as his "paint." He does beautifully detailed watercolors of local historic sites. We talked to him for a while and ended up buying a print of Front Street.

We wandered around the store for a while; I bought an iron Fleur de Lis coat hook (to hang my dog's leash on) and had two keys made. We finished our cokes and moved on down to The Book Merchant.

The Book Merchant is probably my favorite store on Front Street. If I owned a book store, it would be just like this one. It's the anti-Barnes & Noble. It's owned and operated by J. Michael Kenny who must see thousands of people a year in that shop but always seems to remember us. He has two cats that live in the store, although Princess was in "time out" this time and we didn't get to see her. The store has a great collection of local interest books and one that caught my eye this time was of The American Cemetery which is quite old and historic. He also had a hard-to-find (and out of my price range) book of the Kisatchie Forest which I had used before on a research project and loved. The authors combed the area and interviewed the old families throughout the forest, recorded their histories and stories, filled it with maps and pictures, and I just love it. That's for another post, though. Before we left town, Steve surprised me by getting the book for me.

We spent the rest of the afternoon poking in shops, walking along the Cane River, we checked in 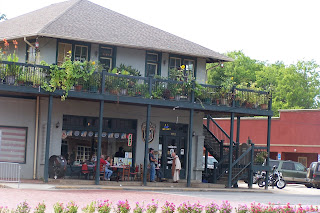 to the hotel at 3 and unloaded our purchases then set out again. We hit a few more shops and ended up ducking into The Pioneer Pub for a couple of cold beers and a quick rest. If you were following me on Twitter you would know by now that we really liked the pub. We'd never been in there before; it was always one of those places we thought we'd do sometime but never had.

We sat at the bar and had a couple of Dos Equis on draft. The bar itself had a sort of concrete top that made me wish for chalk! Great atmosphere in the place and the people were all very friendly. Harold, the owner, sat quietly at the end of the bar and his girlfriend was behind the bar mixing fresh mojitos with fresh mint. She gave us a sample and it was wonderful. I suspect t 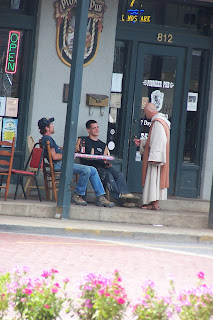 he fresh flowers on every table was her touch - zinnias, black-eyed susans, daisys, etc. We met another interesting character in there, Father Mike, with whom we visited for a while. He and Steve have both done a lot of traveling so they talked about places I've never been. That's him, in the picture, talking to some fellows outside the pub. 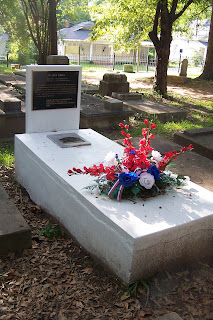 looked too good to pass up.

From there we headed out to visit the American Cemetery. It's probably the oldest cemetery in the Louisiana Purchase. This is the cemetery where they filmed the funeral scene in Steel Magnolias. While there we found the grave of Dr. John Sibley, who as soon as I "twittered" this, I found out was the great, great, great grandfather of blogging buddy Jim at My Bossier. Small world! Dr. John Sibley was a Revolutionary War soldier and was appointed by President Thomas Jefferson as surgeon to the U.S. Army at Natchitoches. If you want to read that plaque you'll have to go to my Flickr photos and look at it there.

We went back to the pub for dinner. And more beer. We both had cheeseburgers and fries and they were awesome. It's hard to get too excited about a cheeseburger but these were great. And the fries were "real." Like you'd make in your own kitchen. We went back the next day and had lunch before leaving town and had the brisket po-boy. Also incredible. We can't wait to go back and try the home made pizzas which looked incredible. 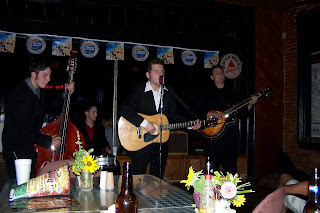 They had a rockabilly band come in about 9:30 and we stayed to check that out. They were really fun and we had a good time. They were called The Makeshifts. They played a lot of Johnny Cash and such. They were dressed the part with the suits, sideburns and hair styles.

We finally left the pub and walked back to the hotel along the river. The ducks had all come up onto the bank for the night and we watched them a bit and finally called it a night.

Before leaving town the next day we hit the Book Merchant again and a kitchen store. We went back to the pub for our brisket sandwiches and then headed out of town.

Our last stop was at Grand Ecore; we'd been there before but the view of Red River from there is incredible. The Visitor's Center is on a 480 foot bluff over the river; there is a long, wrap-around porch with rocking chairs where you can just sit, watch the river, and listen to the birds. It was a strategic site during the Civil War because of the unique views of the river from all directions. There is a walking trail as well where you can still see the remains of the trenches dug by the soldiers.

It was a busy 24 hours but we enjoyed it. As often as we go to Nachitoches, we decided this time that we wanted to do some things we'd never done before and I guess we did. The church and the cemetery were both new sites for us. We've still never done the plantation tour - there are several that are very close. We'll save that for next time.

Posted by Pat Austin Becker at 7:18 AM

Email ThisBlogThis!Share to TwitterShare to FacebookShare to Pinterest
Labels: Natchitoches

Cool! Thanks for the travel idea. Husband has been wanting some adventure. This may be the ticket ;-)

When I was stationed at Ft Polk I would make trips to Natchitoches. What a quaint town, full of history, and good food. I remember going to Mariners on Lake Sibley and having a fine meal.

I also remember Lasyones. It's a throw back to the restaurants past, but what good food.

It was a good place for some friends from Shreveport and I to meet, when I was at Ft Polk. I have fond memories of Natchitoches.

I think I might plan a trip to Natchitoches and revisit some old haunts.