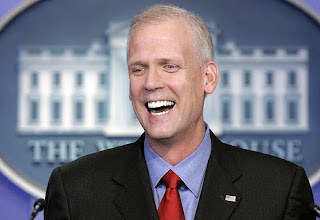 Today is the one year anniversary of Tony Snow's death from colon cancer. Earlier this week Dana Perino, who followed him to the podium at the White House, wrote a lovely tribute to him:

"He had his finger on the pulse of what Americans were thinking, and his fan base grew quickly. His coverage of the Sept. 11 attacks as a reporter gave him the foundation to argue forcefully and convincingly about the importance of keeping our country safe and for supporting our troops. As my predecessor as press secretary, he was brilliant at the podium, with a star quality the White House briefing room had never seen."

And just look at what is there now. Robert Gibbs. Oh, good Lord! Doesn't hold a mere birthday candle to Tony Snow - or Dana Perino for that matter. [Just imagine, for a moment, Tony Snow responding to last week's questioning by Helen Thomas and Chip Someone about "set up" questions!]

Tony Snow, you did us proud. Rest in Peace.

Robert Gibbs, what a joke. He reminds me of a guy whose butt is on fire, and he can't figure out which way to turn to see if it is.

I was listening to Andrew Wilkow (a conservative commentator on X-M Radio) who called Gibbs Mr. Potatohead. Thank goodness traffic was light at the time.

Tony Snow, on the other hand, demonstrated what it meant to be a gentleman and informed before appearing before the ravaging media wolves. Yes, there were times he didn't have an adequate answer, which was rare, but he didn't look like an idiot reaching up his patootie and coming out with a lame response.

I remember first hearing Tony Snow when he filled in for Rush Limbaugh. Even to those he disagree with he remained a gentleman.

A good man is missed.