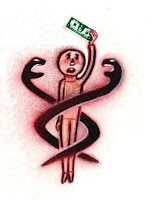 Time to start reading the Takeover of Health Care Bill, because you know, if you don't, nobody will. Here's the short version:

The healthcare overhaul proposal offered Tuesday by U.S. House of Representatives' Democrats will include an extra 5.4% tax on those earning more than $1 million.

One congressional aide said that would bring the top tax rate for the wealthy to 45%.

The House Ways and Means Committee has scheduled debate and votes are due begin Thursday.

Pat, I look forward to your coverage of this as it proceeds. You have been my 'go to' source on cap and trade. Please keep it up.

If you keep taxing millionaires, those millionaires won't keep their money here anymore... and eventually they'll move out too.

Would love you to call in to my show tomorrow AM!