Do You Feel "More Secure" After Obama's Speech? 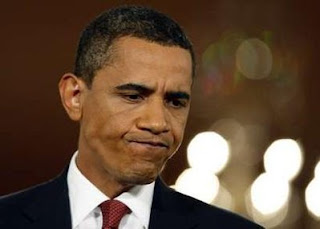 I'll be honest - I could only watch 37 minutes of Obama's speech last night. If you're looking for commentary of the whole thing, go here and here. Pundette does a graceful and non-snarky evaluation of what he said.

I had bailed by the time he started talking about red pills versus blue pills and putting us into the matrix. Thank goodness.

Certainly we all saw and heard somewhat different things in that speech last night, but what I saw, and what breaks my heart, was the President of the United States on national television lying to the American people. Intentionally. Over and over and over. I saw him slander American medical professionals. I saw him attempt to lead us into his dark cavern of primitive health care with his talk of centralized records and bureaucracies and Orwellian decision making.

For the moment, ignore the silly opening where he boasts of the success of the stimulus, repeats the "saved or created" mantra and bashes the successful and the wealthy.

He begins to get into health care with the repetition of that "47 million" figure, which everyone knows by now is misleading. The he says that "the biggest driving force behind our federal deficit is the skyrocketing cost of Medicare and Medicaid." They may be inefficient at times, and need reform, yes, but I'd beg to differ on that deficit issue. His budget and his stimulus and the unchecked Democratic spending do more to the deficit than Medicare or Medicaid.

Big Question Mark No 1: "And it will cover preventive care like check-ups and mammograms that save lives and money." In his interview with Katie Couric, which also aired yesterday, he said, "What I think is important, at this stage, is not trying to micromanage what benefits are covered. Because I think we're still trying to get a framework." So, how does he know preventative care and mammograms are covered?

He says we'll "be able to choose a quality, affordable health plan through a health insurance exchange – a marketplace that promotes choice and competition," but we already have a free market system, so......

Big Lie No. 3: "I have also pledged that health insurance reform will not add to our deficit over the next decade." Huge.

Scary Line No. 1: "the bill I sign must also slow the growth of health care costs in the long run."
Euthanasia, anyone?

Big Lie No. 4: "Well, first of all, you haven't seen me out there blaming the Republicans." Except in his opening statement. And in his remarks the day before in the Rose Garden (that was the same speech where he said he didn't want to saddle our children with debt, another lie!)

Okay - that's where I bailed. I'd heard enough lies. The rest of the Q & A can be found here, where he gets into that whole blue pill/red pill business, and where he accused doctors of taking out kids tonsils only to make a profit. I'm sure the AMA is happy today.

This is, I guess, the part where my commenters (commentors?) will click over and tell me how much George Bush lied, and that's an argument for another day. George Bush is gone, something Obama would do well to remember. Obama blamed Bush at least three times in the part I heard.

The bottom line is as Pundette said, he has a "socialist's heart" and that is where he is trying to lead our health care system. Nobody is saying reform isn't needed, but this proposed legislation is just bad. Scrap it and start over in a bipartisan fashion. And for crying out loud, stop lying to us.

Related posts:
Will Obamacare Cover Illegals?
"This Isn't About Me!"
Lack of Empathy?
Obama Now Worried About Saddling Our Children With Debt?
Obamacare Team Visits Reserve, LA.
"You WILL Lose Your Current Insurance"
Obamacare for Illegals
No More Private Insurance with Obamacare
Starting to Look at the Obamacare Bill
John Boehner Says the Republicans Have a Better Plan
"Say Hello to My Little Friend!"
Take a Look at Obamacare
Going Galt Over Obamacare
Congressman Fleming: What's Good for the Goose.
Posted by Pat Austin Becker at 8:37 AM

I admire your capacity to hang in there. 37 minutes? I couldn't do it. I am SO. SICK. of seeing his smug mug on every channel and when he opens his mouth it is nothing but LIES. Like a choir boy it's ,"me, me, me, me". I get so angry when he is on the air. Gross. I wish to God someone would find something tangible that proves beyond a shadow of a doubt his ineligibility to be the leader of the once free world.

P.S. I reposted your blog over at my place. It was too good not to share. Hope you don't mind.

Wow, you hung on to that speech longer than I could. His public address style is so condescending I can't take very much and have to read the transcripts a few hours later.

Great post, Pat. Thanks for the links. We are muy simpatico. I belatedly :( linked to you in my "He's unbelievable" post.