Protest In Dallas Against Obamacare 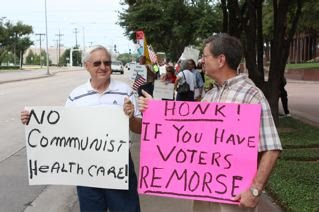 The gathering of members of the Dallas Tea Party in front of Sen. John Cornyn's office yesterday in Dallas, is indicative to me of the continued strength of the movement. From the beginning, liberals have underestimated what the tea parties were all about. In the beginning, the blamed Fox News and other conservative outlets for drumming up the tea parties. They couldn't have been more wrong.

What happened in Dallas yesterday, and with the tea party movement in general, is a clear signal that people have had enough of excessive government spending, whether from conservatives or liberals. That's the point about the protests that liberals have missed - tea party members boo Republicans also.

Yesterday in Dallas, Paula Anderson from Moveon.org expressed her surprise that so many tea party members showed up:

"We really did not expect them to show up." She estimated the crowd at about 130. "From our perspective we took names of everyone there, and we had about 30 people," she told Unfair Park. "And I would assume they maybe had 100." As it turned out, according to Jessica Sandlin, Cornyn's Texas press secretary, Tea Party-hearties also showed up to health-care legislation rallies in Austin and in San Antonio."

If they were surprised yesterday, just wait until September 12 and The March on Washington.

I'm not surprised that Moveon.org was surprised. As you said, they have tried to label this movement as a 'top-down' Republican movement and it is not. I have 'preached' a couple of times (from the viewpoint of an independent) of the importance of keeping it non-partisan. Rob Gaudet has done a great job of that locally.

I know what I'm about to write is a little off subject, but not really. This goes to the way Moonbats think.

I honestly try, and I do try, to listen to the other side to get a different point of view. But you can only take stupidity so long and about 60 seconds of it is all I can take.

This afternoon I was listen to Thom Hartmann on America Left on X-M and actually heard the following from a woman who praised Hartmann for being such a brilliant man who knows so much about the economy
.
This dingbat actually said (and I paraphrase), "Thom, we people in the work force, most of us are progressives, work for corporations that take our money for retirement and invest it in other corporations. And when we retire, we have to roll it over into and IRA, or we'll get taxed to pieces, who in-turn invests it in other corporations. It seems that all we do is invest our money in order for corporations to make money with our money. Is there some way that we can take our money and invest it in the people?"

The answer "Brilliant" economist man gave was that we have to find a way to invest our money with the people.

That made a lot of sense. I think I will go over to Joe, my neighbor who is retired and mows lawns. I think I will invest $500.00 a month in his enterprise and sit back and reap the rewards.

JEEZ! And it's idiots like her is pushing Congress to give us Obamacare.