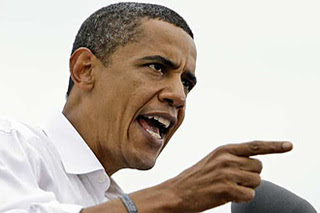 On Thursday last week, Obama released the "Irbil Five" to Iran. It's difficult to fathom the wisdom of this move which further weakens our national security and the security of our armed forces fighting in Iraq and Afghanistan.

Steve Schippert, writing for NRO, explains that over 400 of our American soldiers killed in Iraq have died because of a weapon designed by Iran’s Islamic Revolutionary Guard Corps; the Irbil Five are commanders from this group. Specifically, they are Qods Forces: "Qods Force (IRGC-QF), an organization known for providing funds, weapons, improvised explosive device technology and training to extremist groups attempting to destabilize the Government of Iraq and attack Coalition forces."

Schippert explains the background, that these guys were captured in Iraq in January 2007 during a raid on their safehouse; the house had been dubbed as a "consulate" but had no diplomatic status. I point that out because the AP and Tehran both refer to them as "diplomats," but that is untrue.
Their purpose is to facilitate the killing of as many coalition forces, including Americans, as possible preferably through use of their EFP, a weapon they specifically designed to pierce Abrams tanks. They bring the weapons into Iran and use them against our soldiers.

The Multinational Task Force released this statement a few days after the capture of the five men: "Preliminary results revealed the five detainees are connected to the Iran Revolutionary Guard - Qods Force (IRGC-QF) and organization known for providing funds, weapons, improvised explosive device technology, and training to extremist groups attempting to destablize the Government of Iraq and attack Coalition forces."

In October 2007, Lt. Gen. Raymond Odierno said he believed the Irbil Five should stay in custody. "Militarily, we should hold on to them," he said.

The Long War Journal reports that the release of these five men was preceded by the release in early June by the Obama administration of Laith Qazali. This is the guy that commands the network that General David Petraeus says was behind the January 2007 attack in Karbala which killed five U.S. soldiers.

Why did we release Laith Qazali? Because it was believed that by releasing him, the five British contractors captured in 2007 would be freed. The captors had made demands for release of prisoners and both the Bush Administration and the British refused because you don't negotiate with terrorists. But the Obama administration does. Obama freed Laith Qazali. The only thing that was released in return? The corpses of two of the British hostages.

Okay so let's keep track. Obama so far has released the Irbil Five and Laith Qazli. That's six murdering terrorists who have no intention of reforming their ways. None. And they were all released outright.

nd then; and to be fair, they've never killed Americans.

But don't forget that Binyam Mohammed, believed to be planning a dirty bomb attack in Ameica, was released outright in February 2009 to Britain. He was arrested in Pakistan in 2002 and later held at Gitmo.

The response from the White House to all of this Irbil business is that their release was part of the Status of Forces Agreement which requires the United States eventually to transfer the more than 10,000 Iraqi and third-country detainees it now holds. The Iraq/US SOFA was appproved in late 2008. Steve Schippert is not persuaded:

"That's a load of bunk. Why? Because within the context of what Iran is already doing to its own people, including again today in the streets across Iranian cities, the principled decision would be to pull the rug on any plans to release any of the Iranian regime's thugs, operatives, or representatives. The explanation that this was already long in the works, as if the Obama administration just never noticed it, does not wash. The Obama administration is not stupid or unaware. It may be foolish in the decisions it makes, but not for lack of knowledge or awareness."

There are always ways around things in politics, especially when it comes to releasing thugs and terrorists that intend to do your country harm.

So what is to be concluded of all of this? This may come as a shock, but I don't think Obama actually hates America. I do believe that he has a different vision of America than most of us do. I believe he loves his reshaped vision of America. I can only ascribe it to a dangerous naivete that he believes he will get what he wants by being nice and conciliatory. There can be no other logical explanation for his abandoning a decades old policy of not negotiating with terrorists.

The release of the Irbil Five, Laith Qazali, Binyam Mohammed, assorted Gitmo prisoners, the closing of Gitmo in general, all seem to me to be working against the security of America in the long run. Exactly how many of these thugs will be released before we have to pay the piper? What exactly does the Obama administration believe the Irbil Five will do once back in circulation in Iran? Join the choir? Work in humanitarian efforts?

There's a real pattern here and it scares the heck out of me. These releases combined with the constant apology tours, pointing out America as evil or guilty of numerous sins, weakens us in the eyes of the world. During the election one of my largest concerns was national security. To me, and I suspect to the rest of the world, it's much, much weaker now than it was.

We have a president that is not proud of America or it's accomplishments. I point back to the Victor Davis Hanson article of Friday when he said:

"Also, in emphasizing America’s alleged sins, Obama shows himself to be somehow oblivious to the simple fact that he enjoys such power and prestige as a U.S. president because someone, at some time, must have done something quite extraordinary. Surely there is more to America than slavery and Hiroshima. So many Americans are vaguely beginning to sense that Obama is simply ignorant of Valley Forge, the Oregon Trail, and Iwo Jima. What happened at these places seems absent from his knowledge of the past, and so fails to inform his present narrative of and future plans for the nation."

And why isn't all of this all over the evening news broadcasts? Why isn't it on the front page of your papers? Why aren't more people talking about it? How can the trading of terrorists for hostages not be NEWS? We all know the answer to that. It's also noted and lamented by by Andy McCarthy when he said "the silence is deafening."

The world is laughing at us.

Posted by Pat Austin Becker at 9:00 AM