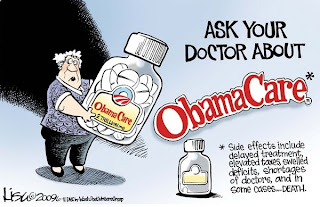 Update: Welcome Michelle Malkin readers! Look around while you're here!


Via Memeorandum, in an interview with Katie Couric yesterday, Obama had this in response to her question about Obamacare for illegals:

"First of all, I'd like to create a situation where we're dealing with illegal immigration, so that we don't have illegal immigrants," he said. "And we've got legal residents or citizens who are eligible for the plan. And I want a comprehensive immigration plan that creates a pathway to achieve that."

"The one exception that I think has to be discussed is how are we treating children," he continued. "Partly because if you've got children who may be here illegally but are still in playgrounds or at schools, and potentially are passing on illnesses and communicable diseases, that aren't getting vaccinated, that I think is a situation where you may have to make an exception."

This is a perfect example of why everyone needs to slow down and actually read the bill. Obama does not know what's in the bills currently under consideration. It's his job to know. Steney Hoyer was on Fox this morning saying "There's no rush! We've been talking about health care reform for decades!" But if nobody is clear on what is in the bill or what it all means, it's a rush. Slow down.

Obama told Couric that illegals shouldn't have Obamacare but maybe their children should. He needs to read Michelle Malkin's new column which explains exactly how illegals will be covered:

Nevada GOP Rep. Dean Heller’s measure would have enforced income, eligibility, and immigration verification screening on all Obamacare patients. Unlike most everything else stuffed into the House Democrats’ plan, the citizenship vetting process would not have required building a new bureaucracy. Rep. Heller proposed using existing state and federal databases created years ago to root out entitlement fraud.

The House bill may "explicity exclude" illegals, but there's not one thing in there to prevent their access to coverage or to even verify who is legal and who isn't. That's usually referred to as a loophole.

What comes after that would then be the "sudden realization" that we're covering all these illegals, about to end up like California on a national scale, and then you have to either re-do what you've already passed, write new laws, or just make the illegals legal.

Or is that part of the plan?

When Obama tells Couric, "I'd like to create a situation where we're dealing with illegal immigration, so that we don't have illegal immigrants..." it isn't hard to read between the lines.

Related posts:
"This Isn't About Me!"
Lack of Empathy?
Obama Now Worried About Saddling Our Children With Debt?
Obamacare Team Visits Reserve, LA.
"You WILL Lose Your Current Insurance"
Obamacare for Illegals
No More Private Insurance with Obamacare
A Picture is Worth $245 Billion
Starting to Look at the Obamacare Bill
John Boehner Says the Republicans Have a Better Plan
"Say Hello to My Little Friend!"
Take a Look at Obamacare
Going Galt Over Obamacare
Congressman Fleming: What's Good for the Goose.
Posted by Pat Austin Becker at 12:34 PM

Two paramount issues are very much prevalent on the minds of US taxpayers? Both command your attention, as they are umbilical connected? Health care and illegal immigration! In1986 hospital and ambulance services must convey care to anyone needing emergency treatment regardless of citizenship, legal status or ability to pay. Trouble is most of these are unfunded federal mandates? Because taxpayers always carry the financial weight, the hospitals, as the government overlook the costs involved or they short-change local government? Over thirty years or even longer taxpayers have unwittingly supported millions of illegal aliens, who choose to come here, knowing full well they were breaching the law. The cost is taboo when relating to the free health care, schooling to K-12, and undisclosed low income housing and other financial rewards for breaking our laws, not to forget an overcrowded penal system.

Those who appose any form of a health care agenda in most cases will be defeated financially--big time. That includes lawmakers who have a monetary interest in undermining a universal medical system, as they are apt stockholders in hospitals, clinics, drug companies and even the prosperous health insurance industry. Is it no wonder their using dirty tactics, to bombard the airwaves with outrageous half-truths, about the European and Canadian health care system, that has worked with complete harmony for decades? Illegal immigration has the same ramifications, that if Washington passes a path to citizenship, against the opinion of a larger portion of the US population, it will mean higher taxes, and rising irreversible population growth. It will pilot to a chain migration of family members that will rupture welfare benefits to all poor Americans. Everybody must have noticed the dire-straits financially that California--a Sanctuary State--has been impacted by mass illegal immigration?

Then once the word reaches outside the borders of the US, even more millions will stream across our sovereign lands, looking for work and handouts. As with Health care the open border extremist and special interest lobby, already have their orders from the cheap labor industries, to quash any new laws that have a hard-hitting effect on immigration. Democrats and certain members of the GOP have a considerable interest, in abating any laws that, would fasten the border or would inflict penalties on businesses. E-Verify are the most secure extraction mechanism to remove illegal labor from job locations. Even with unemployment rising above 10.0 percent, legislators like Sen. Reid, Pelosi, and Napolitano are part of the conspiracy to unwind any laws, such as E-Verify, local police law 287(g), Save Act, Real ID and place them with puny substitutes.

Until they have proved that these new enforcement laws actually work such as Schumer's new alternative to E-Verify, that all U.S. workers to verify their identity using fingerprints or digital photos Homeland Security should keep upgrading E-Verify and not--REPLACE IT? WE MUST CONSTANTLY RELAY OUR ANGER AND DISAPPOINTMENT TO OUR SENATORS AND REPRESENTATIVES AT 202-224-3121---BEFORE IT'S TOO LATE. WE MUST SAY NO AMNESTY! SEAL OUR BORDERS AND NO MORE FREEBIES TO ILLEGAL ALIENS. THEY ARE THE CRIMINALS, NOT AMERICANS WHO SACRIFICE TAXES? GOOGLE--NUMBERSUSA for details our government and the media have a nefarious talent, for keeping facts under wraps?

Damn Brittanicus, if we were in school and had to follow you after the teacher called on you to answer a question, all I could do is say, "Brittanicus took my answer."
Well said.

I will add this. During my travels in the Army, I had an occasion to be stationed in Germany. Beautiful country, and I love the people. I also love some of the things they had over there, but I realize that what works there won't work over here.

(Side note: But why would that stop a lib. Hell, they're pushing the new curly lightbulbs on us, because it's good for the environment, but didn't take the next step on figuring out how to dispose of them, because they contain mercury, which is bad for the environment. And we're suppose to turn our health care over to the same nincompoops whose pushing curly lightbulbs and other debacles?)

Anyway, When I was in Germany I dated a German girl who lived Neu Isenburg (a suburb of Frankfurt), and because of that I was able to get a better understanding of day to day life for most Germans

Yes, some aspects were good, but those people were taxed to the hilt (almost 70 percent of their income, and that was nearly 30 years ago). And on top of that they were taxed for how many radios they had, tv's, refrigerators, and the list went on and on...

So, before the libs tell you how wonderful things are in Europe, ask them if they had ever been there or just spouting the party line.

Yes, there are things in Europe that is absolutely wonderful, but they won't work here in America. Why? Because the two places are different.

As far as immigration, that issue too has done extreme damage to Germany as well.