Obama Now Worried About Saddling Our Children With Debt? 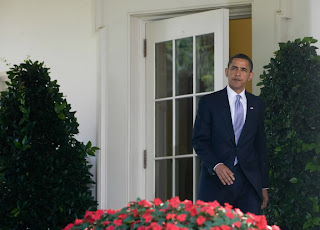 I watched Obama read his remarks on health care reform a little while ago. My first reaction was that he should get his teleprompter fixed; I'd rather see the tennis-match-head-swivel than look at the top of his head as he looks down every third word.

The substance of the remarks were more of the same and filled with the same spin and the same cliches. There were also some outright lies in them. And plenty of gall.

He said time and time again that those that oppose health care reform are only trying "to score political points." I don't believe this is wholly true. Some, possibly. Others are standing up to his proposals because they believe it to be socialistic in nature as well as too expensive. Some are standing up against Obamacare because they believe that Americans will be forced into public option plans. It's not all about scoring political points, Mr. Obama.

He went on to "lay out" what he called "the substantial common ground in the current bills." He says that "You won't lose your health care if you change jobs or if you lose your job or if you start a business." This is spin. Enrollments in private plans will be closed once Obamacare becomes law. So, while technically he is correct when he says you won't lose your coverage, your coverage will come from a public plan rather than a private plan, should you change jobs.

He says that you will be able to "compare the price and quality of different plans and pick the plan" you want. But they will all be public plans. That is not "choice," Mr. Obama. That is socialism.

As Betsy McCaughey explained, if you currently get your coverage through your employer, your employer has five years to switch you into a "qualified plan" but none of the bills currently define what that is.

This part was especially rich; when Obama said that the American people don't care about politics so much, or who is up or down in Washington, but they do care about "whether their children are going to be saddled with debt."

The truth is, Obama doesn't even know what is in any of the bills; he said so. When confronted with the information that new policies would not be written, Obama said, “You know, I have to say that I am not familiar with the provision you are talking about.”

Yet he wants us to "trust" him.

Related posts:
Obamacare Team Visits Reserve, LA.
"You WILL Lose Your Current Insurance"
Obamacare for Illegals
Melt the Phones!
No More Private Insurance with Obamacare
A Picture is Worth $245 Billion
Starting to Look at the Obamacare Bill
John Boehner Says the Republicans Have a Better Plan
"Say Hello to My Little Friend!"
Take a Look at Obamacare
Going Galt Over Obamacare
Congressman Fleming: What's Good for the Goose.
Posted by Pat Austin Becker at 12:35 PM

Gall is definitely a word for it.

The audacity of hope in action...

I guess hoping that nobody reads the bills, cares that he tells deliberated, one-step untruths, and that no one notices his declining popularity both in the public and within Congress.