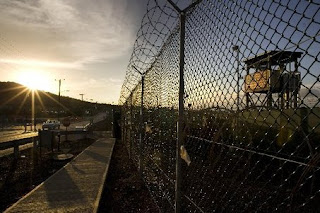 Jeff Duncan, writing for the NOLA Times-Picayune, offered a column this week about Drew Brees and his recent trip to Gitmo. Duncan seems incredulous that Brees seemed to find Gitmo to be a model prison. (Remember, Attorney General Eric Holder also determined that Guantanamo Bay was a model prison.)

As Obama's campaign promise to close Gitmo quickly comes due, there is still some indecision about what to do with the almost 200 prisoners that remain. Brees, like your humble blogger, believes that closing the prison is a huge mistake:

"I can say this after that experience -- the worst thing we can do is shut that baby down, for a lot of reasons," Brees said. "But I think there's a big misconception as to how we are treating those prisoners; those detainees over there. They are being treated probably 10 times better than any prisoner in a U.S. prison."

As I've posted before, those prisoners have it much better in Gitmo than they EVER had it in Afghanistan or Yemin or wherever they came from, and certainly better than they would have it in a SuperMax prison within the United States. That is, unless Obama is planning on loosening restrictions in a SuperMax to the point that they are in Gitmo. We might be seeing signs of this in the decision of Attorney General Holder in allowing the SAMS on Richard C. Reid to expire on the grounds that they were a violation of his First Amendment rights. Yes, at Gitmo they are in detention and don't have freedom; nobody says it's Disneyland, but it beats a SuperMax.

For Duncan's part, he calls the statements of Drew Brees "eye opening." Brees points out that the detainees can watch television, pray five times a day, play Wii, watch movies, receive letters and phone calls, write and phone home, and as I've written about before, they have the best medical care possible, as well as personalized diet plans.

Duncan is quick to point out that this was not always the case and he seems to be trying to make the point that Gitmo is an inhumane place. He says:

I'm sure Brees accurately described the conditions at Gitmo during his visit. But clearly that wasn't the case previously. An 18-month investigation by the United Nations Commission on Human Rights in 2006 charged U.S. officials with human rights violations against the prisoners and urged the U.S. to close the military prison in Cuba. President Barack Obama announced in January plans to close the detention center at the Guantanamo Bay Naval Base within a period of no later than one year and to prohibit cruel, inhuman, or degrading treatment in interrogations of detained individuals.

Any abuses that occurred at Gitmo were in the early days, right after it was hastily formed from the need of detaining terrorists attempting to kill Americans in connection with the 9/11 attacks. Those conditions have long since been corrected.

Duncan then laments that Brees' comments "flew under the radar" in the press but that they did (thank goodness!) resonate with some Saints fans who left negative comments on a popular fan blog.

Drew Brees is an active supporter of our military. The people at Gitmo did not put on a show just for his visit. Brees did not embellish what he saw there. In fact, much of what he reported, especially as to the restraint the guards must show in the face of detainees who fling feces and urine at them on a daily basis, is also recorded in Lt. Col. Gordon Cucullu's book Inside Gitmo.

Representative Jan Schakowsky wrote on Huffington Post about her recent trip to Gitmo. She's concerned about the rights of the detainees. She describes "Camp 4 where prisoners live in barrack-style units, 5 to a unit (though built to accommodate 10) who are 'free' to move in and out of an outdoor yard 20 hours per day. Camp 5 and 6 are medium and maximum (not counting the high value detainees) and visitors are shown the small individual cells and are told that these prisoners are given up to 4 hours per day out in the yard with other prisoners. Camps 4, 5, 6 are comfortably air-conditioned." Terrible. Just terrible.

Schakowsky's main point seems to be that Gitmo must be closed because nobody there has been convicted of doing anything wrong. While everyone loves to blame Bush, remember that one of Obama's first acts was the delay of the tribunals. In the meantime, Team Obama began to figure out how to deal with the prisoners.

The Gitmo prisoners are slowly being filtered out into the world as Obama prepares to close the prison. The New York Times reported this week that Ireland has agreed to accept two of them. No word on if they will be freed, incarcerated, monitored, nothing. And it was reported yesterday that a judge has ordered Mohammed Jowad freed, saying "Enough has been imposed on this young man to date." He was charged with throwing a hand grenade in 2002 that injured two American soldiers and their Afghan interpreter. Thomas Joscelyn writes in today's Weekly Standard of another release, that of Khaled al Mutayri. Judge Colleen Kollar-Kotelly ordered him released on Wednesday.

One by one many of them will be free to attack us again.

But this does not seem to bother people like Jeff Duncan or Rep. Jan Schakowsky who appear to be more concerned about the rights of terrorists than the rights and safety of Americans.

The Surreal Presidency and The Bermuda Triangle

Posted by Pat Austin Becker at 9:25 AM