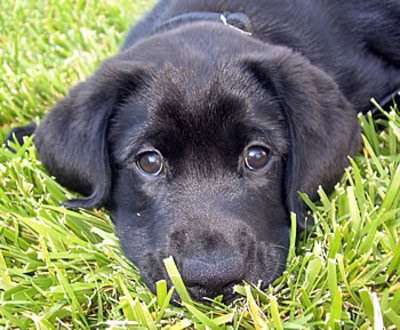 The Teenager brought home a new puppy last night despite my constant warnings for him not to. Now the thing is here and I'm off to the vet to get it checked out. (No that picture is not his puppy, it's a random internet puppy. But it looks like him!) Some quick Saturday linkage before I do...

It's been pretty much all about Obamacare for me this week. Michelle Malkin (who spread the linky-love this way twice this week!) had a great column on Obamacare + John Holdren, science czar. It's some scary stuff. Seriously.

Fishersville Mike has the lessons of Gates-gate. I like that - Gates-gate. It's got a ring to it.
On the subject of the Gates affair, Yukio has a great post on The Race Debate; a quote just to get you over there: "Obama initially took a side, presumed racism (why else bring it up during his answer), and assigned blame for the whole incident solely at the police's front door. He says nothing in his first answer about any sort of overreaction by Gates. Instead, after offering an excuse for Gates ("any of us would be pretty angry"), Obama talks about police bias for four transcribed paragraphs. It seems like he wants us all to now forget about that."

TrogloPundit is practicing for his second career in labeling hot dogs, should this wildly successful business of blogging prove to be too much.

Pundette has the latest on the Dog-Fight in the House; this ain't gonna be pretty.

Smitty at The Other McCain has the story on Rick Perry who has had enough of big government. He must think there's a Consitution in play here, or something. Silly Governor.

Stacy finally posted his fireworks video - it's beautiful. Remind me next year to make a donation! (Hangs head in shame.)

Red is struggling with some anger management; drop on over and give her some words of encouragement!

Left Coast Rebel is stirring up some activism and I think it's a good idea. Jam the email boxes, people! Speaking of activism, Doug Ross is encouraging some himself! I love this idea! Monique Stuart has declared August Tea Party month, speaking of activism. She suggests we use this time to make contact with our Reps!

Jules Crittenden has a post on the latest Medal of Honor recipient and also wraps up the Gates-gate (see, I like that term!) affair.

Also on Gates and Obama, don't miss Bride of Rove, because you know, I LOVE her blog.

Gateway Pundit has a post on Obamacare and euthanasia. Eeek!

Ann Althouse has been putting up some way-cool photos this week! Loved the rib joint.

Jimmie Bise reports on another kink in the IG scandal. Yes, that story is still there, folks. Not going to go away!

Speaking of puppies, The Daley Gator has the cutest puppy picture of the week.

Donald Douglas at American Power is all over the Erin Andrews story, which is good because I refuse to write about it.

Carol at No Sheeples Here! is redecorating! Again! But she has some wise advice.

Grandpa John has something to celebrate this week!

Susanna Logan has got the secret to the world. She might be on to something.

And finally, Women of the GOP has a profile of Kelly Ayotte. Don't know who that is? Go see!

That's it for now; I've got to go get this puppy to the vet for a once over!
Posted by Pat Austin Becker at 8:03 AM

that's a cute puppy! send us a pic of yours and the details, name, etc when you get a chance. i thought you were gonna end up w/ one of liz's puppies a few years ago so it doesn't surprise me you have a new puppy.

i'll email a question i was gonna ask here but i don't want your readers to wonder if i just fell off the melon wagon. duh!!!???!!!

Say thanks for the linky lurve. God knows I need it. (shakes head) ;-)