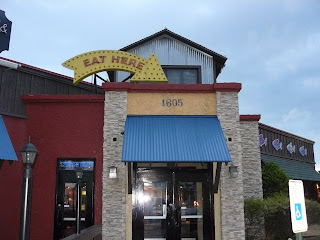 Take time out from politics for a minute; I'm doing a restaurant review here.

Steve and I have found a new favorite restaurant. We went to Vince's tonight (it's in the old Tony Roma's building by WalMart/Bert Kouns).

As I understand it, Vince has a regular following because of his North Port restaurant, but not getting up to North Market much, I'd never heard of it. We ended up there because we loved the steaks at Madison Square Garden and the guy that used to run that place was awesome with a steak. His name is Bill and Bill knows about customer service and about cooking with good, fresh ingredients. We went to Madison Square Garden one night after Bill had left (we didn't know it) and could immediately tell that the food was different. We never went back. But we tracked Bill down at Vince's.

They had a good crowd going when we arrived around 6. The place is open and nicely decorated - not too formal and not too casual. So Steve had the all you can eat catfish which came with slaw, bean soup and french fries. I had the crabmeat au gratin. We also ordered fried mushrooms. The mushrooms were GREAT - they were fresh and prepared on site - not frozen. They were piping hot and served with ranch dressing. Both our entrees were perfect; Steve pronounced the catfish perfectly seasoned and fresh. My crabmeat was appropriately rich, very cheesy and with the occasional tiny shell fragment just to let you know it's the real deal!

This is the one time I didn't take pictures of my food with my iPhone; I saw they had a website and figured they'd have pictures of their food there. Sorry. Use your imagination.

Vince has an extensive menu which you can see here. They have an inviting bar and oysters on the half shell; count me in on that one. It's a perfect place to pull in to for happy hour. They also have a patio which will be great when it's not 103 degrees outside.

What will keep me coming back to Vince's, and what Vince has clearly figured out, is the customer service. I've paid my dues in the food service industry and know the ropes. Vince knows that customers appreciate the owner/manager coming by the table and checking on things. He comes by, introduces himself, and checks to be sure things are okay. That matters. I was filling out my customer comment card and it asked for my server's name; I told Steve, "I don't remember my server's name!" and the passing hostess looked back over her shoulder and said, "It's Kelly!" Service! Two different bus boys checked to see how we were or if we needed plates cleared; they were conversational but not overbearing. Nobody was too fussy, it was all unobtrusive, and well appreciated.

We didn't have room for dessert, but they had plenty to offer, including bread pudding and chocolate cake.

So, if you're in the Shreveport area, and I know a lot of my readers are, check out Vince's. It's located smack in the middle of a zillion chain restaurants out there, but I'd rather support a local guy any day than some chain restaurant with frozen, processed food. We'll definitely be back.
Posted by Pat Austin Becker at 8:31 PM

Email ThisBlogThis!Share to TwitterShare to FacebookShare to Pinterest
Labels: food and drink, restaurants

We had lunch yesterday at Red Lobster in Bossier with the owner of KaBloom in Shreveport. He was telling us about the restaurant you just reviewed. He pronounced it worthy of a visit as well. Just as a side, I had not been to Red Lobster in years and it was just awesome. Grilled talapia, mashed potatoes and real fresh green salad along with their awesome cheese biscuits was just perfect. I'll be going back there as well.

One of my friends ordered a bloody Mary, but she was mad that the celery was frozen. Didn't stop her from sucking it right down though!!!