A Picture is Worth $245 Billion

Here's the new graphic from The Heritage Foundation reflecting the expense of the House Obamacare bill: 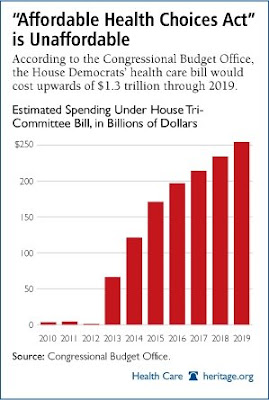 And that's on top of the already dismal projected spending picture we've been seeing.

Notice all the big spending kicks in on this after the next presidential election. You think that's an accident?

If this administration actually sat down and wrote out a plan to intentionally wreck the economic structure of this country, and thereby the country, I can't imagine anything they'd do differently.

Related posts:
Starting to Look at the Obamacare Bill
John Boehner Says the Republicans Have a Better Plan
"Say Hello to My Little Friend!"
Take a Look at Obamacare
Going Galt Over Obamacare
Congressman Fleming: What's Good for the Goose...
Posted by Pat Austin Becker at 4:02 PM