Jeb Bush on the Future of the Republican Party 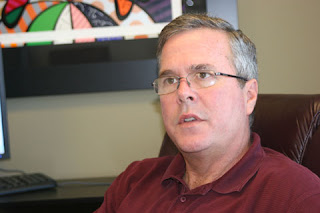 Jeb Bush examines the future of the Republican party in an interview with Tucker Carlson. Carlson's presence rather overshadows the interview at times as he can't resist editorializing at every turn. That said, Jeb has some interesting things to say.

When asked about the current state of the GOP, Bush points out that the demographics "are going against us." He points to the fact that out of 53 districts in California, Democratic registration outnumbers Republicans in every single one. He says, "The swing voters are Hispanic voters in most of the swing states. And Republicans have done a poor job, sending signals that Hispanics aren't wanted in our party. Which is bizarre." He's got a point there, at least in Florida. The early dismissal of Marco Rubio by the NRSC is evidence of that. Rubio is a solid conservative candidate with wide appeal yet he was overthrown almost immediately in favor of the centrist Charlie Crist.
When asked if Republicans have alienated Hispanics, Bush replies, "The people that are on television are the loudest on the immigration issue. The emotion, the anger, is a signal. Put aside the substance, but just in terms of the language. It makes it sound like them and us." He suggests that Republicans moderate their language and change the tone in order to draw more Hispanic voters. I'm not sure that's the whole answer, but I think he has a point. One thing Republicans have not done well is find a way to effectively get their message across.

Bush says that conservatives have "lost their way." This much I agree with. Republicans have drifted too far center to the point where you can't tell many of them from the Democrats and this led to critical defeats in the past couple of elections. When voters can't tell one party from the other, what difference does it make who you vote for?

Bush contends that "we haven't upgraded our message. We haven't updated it" which he says makes Republicans "not relevant to the world we live in." What does this mean exactly? Become more centrist? Become more conservative? He suggests finding more "creative ways of expressing the principles."

Bush goes on to talk a bit about the 2008 campaign and why he thinks McCain lost, even though "he was far more qualified to be president than President Obama," and he talks about future contenders for the leadership of the Republican party (Newt, Rick Baker, Mitch Daniels, to name a few.)

If you can get through Tucker Carlson's smarmy editorializing, it's an interesting read.
Posted by Pat Austin Becker at 3:07 PM