So Obama Was Anti-Nuke in College ... Is That News? 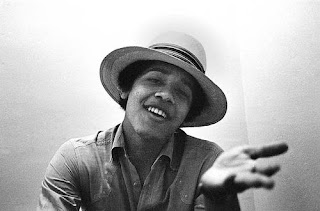 What amazes me most (and really, it shouldn't) about the 1983 Obama article is that it has just now been "discovered."

Oh yes, the article exposes his radical viewpoints, his anti-militarism, and his anti-nuclear proliferation viewpoints, but how is it that the piece just now comes to light? And would it have made any difference if it had come out earlier? In answer to the second question, not really. I don't think it would have swayed many votes one way or the other. I think the article just shows what most of us already knew about him.

What amazes me though is that this new "discovery" shows that the media just hasn't done the digging to find these pieces that it should have done during the campaign. The worse alternative would be to consider that they DO have these articles and papers that Obama wrote, and are just choosing not to reveal them. If the New York Times can chose to sit on the story of a captured journalist for several months, it's not too much of a stretch to think they could also sit on unflattering articles by Obama. Just a supposition.

Obama has been quite secretive and quiet about his college years. He's written two memoirs but we can't find anything he wrote at Columbia or Harvard? Seriously?

This 1983 piece reveals, as others have pointed out this morning, his radical and naive views of nuclear disarmament. I don't think this article is particularly shocking or revealing. We already know this about him. He expressed these views during the campaign. Does it matter that he felt this way in college? Not really; not to me. We already know he has little sense of history and a naive outlook on foreign policy. He has not grown intellectually one iota since college. He still believes we can all hold hands and make nice and the world will be a happy, peaceful place.

I'd be more interested in seeing what other papers are out there. Has he written anything about Israel? Race relations? Could he have written anything at Harvard that might have given us insight about how he wants to shape the Supreme Court? Anything on Cuba or Venezuela? Ever? Any of these things could have informed us during the campaign. The press chose not to go there.

We are in dangerous hands, but we already knew that.
Posted by Pat Austin Becker at 9:37 AM

Well. According to his exagerated memoir (could not possibly have been required to dress up for that job and certainly did not have a secretary - but we're used to the lies now so why quibble) around about then he was regularly "getting high". So. Hard to take this article of his seriously. Like a lot of things stoners think up under the influence, this was one idea he should have flushed with the vomit. Instead, we get to see his psychedelic visions become reality.

BrideofRove- very thought-provoking. Bush was an alcoholic, Obama was a pothead, who cares? Seriously, this is your level of discourse?

Pat - So, i read the article. Where exactly are the radical viewpoints? "Consequently. the thrust of ARA is towards generating dialogue which will give people a rational handle
on this controversial subject. This includes bringing speakers like Daniel ElIsberg to campus, publishing fact sheets compiled by interested faculty, and investigating the possible development of an interdisciplinary program in
the Columbia curriculum dealing with peace, disarmament, and world order. Tied in with such a thrust is the absence of what Don calls "a party line." By taking an almost apolitical approach to the problem, ARA hopes to get the
university to take nuclear arms issues seriously. "People don't like having their intelligence insulted," says Don, "so we try to disseminate information and allow the individual to make his or
her own decision."

First of all, throughout the western world, Nuclear disarmament is a fairly universally accepted view, not a radical view. Secondly, nuclear disarmament began long before Obama, so its hardly one of his controversial viewpoints. Thirdly, What do you think is the impetus for our involvement with North Korea and Iran? Its nuclear disarmament and non-proliferation. So what's the problem?

And about the press. If the New York Times is privy to knowledge of, say, a impending US mission in Afghanistan, is it their responsibility to the public to report that knowledge immediately? Even if it were to endanger the success of the mission or the lives of soldiers? I'm guessing we'd all say "no". So, is it possible, as the NYT has claimed, that they sat on the story of their captured reporter for fear that reporting it would further endanger his life? It seems both plausible and understandable to me. Yet, you suggest that the NYT sitting on the story of the captured reporter is justifiable cause for believing that they'd sit on a story which could damage Obama? Seriously, how nonsensical is that?

I suppose it makes you feel good to criticize Obama, mocking policies as naive or almost-childish because they emerge from a philosophical position that war and death are not ALWAYS necessary. In case you haven't noticed, he's sending more troops into Afghanistan, so apparently he's not ALWAYS the naive pacifist, as you'd describe him. And more soldiers (consequently) are dying now that we've ramped up our activities there. It is HORRIFIC to me that young men and women are dying THERE as you and i are debating this issue here, in our safe homes. For you to characterize your President as someone who is naieve, fearful, or soft because his foreign policy does not meet your desires for belligerence, intimidation, or aggression toward other nations (some admittedly despicable) is REALLY easy to to say, as neither your neck (nor mine) is on the line. I have family and friends who have served, and are currently serving, and i sleep much better knowing that our President enters these situations with care and deliberation, rather than arrogance and ignorance. And you may not want to admit it, but we all know that we went into Iraq under false pretenses. Tens of thousands of Americans have died under false pretenses. And untold numbers of civilians in those countries. Tens of Thousands of lives. Yet, the whole endeavor is justified and applauded by you because it was a war waged by a President of your political party. Right? The discussion of war and foreign policy is nothing but a platform for your rantings about conservatives and liberals. For someone who claims such patriotism, your thoughts come across as nothing more than hellbent political ideology and a fixation on your "side" winning at whatever cost.

What this article tells me is that he is a terrible researcher, uncritical of his subject's statements - I talked about the impossibility of the statements in the article at: