Waxman is Off the Mark 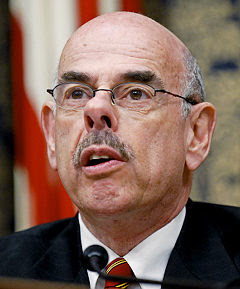 Henry Waxman is now saying the GOP is "rooting against the country" because of their opposition to Waxman-Markey and to the health care takeover. He seems to be going back to the out-of-context Rush Limbaugh quote when he says “It appears that the Republican Party leadership in the Congress has made a decision that they want to deny President Obama success, which means, in my mind, they are rooting against the country, as well.”

Waxman should understand that opposition to a job crippling energy tax and opposition to nationalized health care is not a personal vendetta against Obama. If denying Obama success means opposing those policies which I believe to be detrimental to American values and conservative principles then I guess that's what I'm doing. But it's all about fighting for what I believe is a better path for the American economy and the American in general than a personal grievance against Obama.

The case has been made, and partially by the Democrats themselves in the bill, that Waxman-Markey will kill jobs. This is why there is a provision to provide compensation for those that WILL lose their jobs. Evidence abounds that this bill is a job killer. It is also well documented that Waxman-Markey will increase energy costs (and food costs and costs of everything else) for every single American. Even those that will get cash directly deposited into their bank accounts to help pay those higher energy costs will be paying more in the grocery store, more for clothing, more for everything else they buy. And at the same time it does little or nothing toward reducing global warming, which may or may not actually exist. The debate on that isn't over. Ridiculous.

If opposing a national health care takeover is unpatriotic and "rooting against America" then count me in on that one, too. Did you see this lady from Canada? Listen to this:

Is that what I want for Americans? No.

Honestly, I believe we've strayed so far into this entitlement culture that not even Republicans always see clearly where they're going. I realize that as a country you have to grow, progress and evolve, but I don't think the Founding Fathers ever intended for the government to provide health care to everybody. I just don't believe health care is a right.

Waxman is off the mark when he says that Republicans just "want to deny President Obama success." If handing him success means handing over my conservative principles and values, then yes, that's what I'm doing. But I'm not "rooting against the country." I'm rooting against big government, massive spending, and job loss. I'm rooting FOR the country.

Update: What Texas Rainmaker said. Yeah.
Posted by Pat Austin Becker at 10:13 AM