Will There be a Second Stimulus? 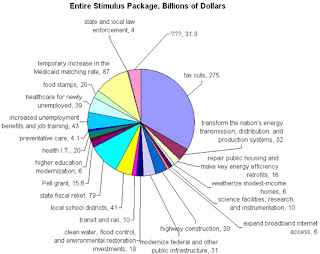 Laura Tyson, a member of Obama’s Economic Recovery Advisory board, thinks we should consider another stimulus, this one focusing on infrastructure projects because the Porkulus bill in February was "too small."

This is just her opinion and it is not in accord with what Biden said earlier this week when he said it was "premature to discuss crafting another stimulus because the current measures have yet to fully take effect." Obama also said it's not quite time to consider a second stimulus, but his comments usually have expiration dates. Today, Obama said this to Fox News: "I don't take anything off the table when unemployment is close to 10 percent and a lot of Americans are hurting out there," Both Obama and Biden could conceivably go along with a second stimulus bill in the near future.

Derek Thompson at the Atlantic is putting his money on no second stimulus. He says this chart would work against such a proposal: 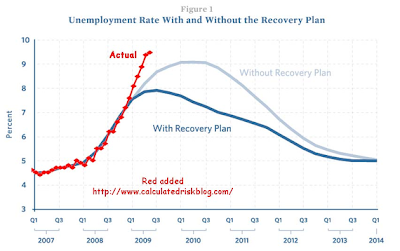 Thompson also says that with so many irons in the fire now, so to speak, that introducing major new economic legislation would be detrimental to those other projects such as health care, climate change and bank regulation. Colin Powell has already expressed concerns about Obama trying to do too much, and spend too much, at once.

Let's review some of the gems in the February stimulus package:

The list goes on and on, but very little of this is actually stimulating the economy. Remember, this is the bill nobody read before the voted on it. Members received the bill right before midnight on Thursday and were expected to vote on it on Friday after multiple changes and additions had been made behind closed doors. Is this what we should anticipate with a second stimulus?

Eric Cantor has said that Republicans are prepared to work on a second stimulus as long as this one has tax cuts and help for small businesses. "He said that lawmakers and the White House should redirect some of the money yet to be spent in the first stimulus away from government programs and toward businesses and taxpayers." He would like to see an income tax cut for small businesses and their employees. The Hill reminds us that "the $787 billion bill passed in February steered approximately 60 percent of its funds to government programs and less than 40 percent toward tax cuts."

Even at this early stage it's clear that the stimulus isn't doing what they said it would do. Biden says "we underestimated" the state of the economy. That's reassuring. What this administration should do is work in a truly bi-partisan way to rechannel some of the money allocated in the stimulus, as Cantor suggests, and get this crazed spending under control. The February stimulus was in no way bi-partisan. It was crafted by Pelosi and company behind closed doors in the dark of night with little or no Republican input.

Rasmussen has a new poll out today which indicates that 60% of Americans are opposed to a second stimulus this year while only 27% are in favor. 2010 is coming and many in Congress, of BOTH parties, are in jeopardy of keeping their jobs. People are fed up with out of control spending in Washington and their - our - discontent will be made clear in the voting booth. More spending isn't what is needed - better spending would be a good start though. Redirect what is already allocated and quit printing more money to throw down the drain.


Related Posts:
A Flaming Bag of Poop
Piling on the Pork
Porkulus Projects
Pork in the Stimulus
Posted by Pat Austin Becker at 9:15 AM

That second graph has to be a bit embarassing to Obama. And right after he declared the Recovery Act a success a few days back. Ouch.