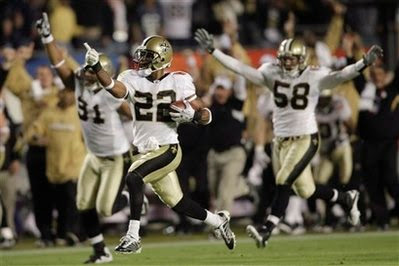 Hell has frozen over! Government Offices in Washington are shut down tomorrow...and the SAINTS WON THE SUPER BOWL!!!!!!!!!!!!!!!!!

I was a nervous wreck up until the last minute and a half and then I figured we had it!

Shortly after the game ended you could hear yelling and horns honking all around; I went outside on the porch and a guy was running down the street in his tennis shoes, his briefs, and nothing else, hands over head, with his friend driving along behind him honking the horn for all to hear. I'm assuming he lost a bet!

Here is a live cam of Bourbon Street! Here is the corner of Napoleon and St. Charles.

HOW SWEET IT IS!! Husband and I just blew up the rest of our black cat stash from new years! That Porter interception was b-e-a-utiful!

That had to be one of the most historic chokes by a leader since President Bush and the pretzel (nothing against Mr. Bush).

It's a twofer for Pat Austin. Her Saints win the Super Bowl and Legal Insurrection lists 'And So it Goes in Shreveport' as blog of the day!