Full Metal Jacket Reach Around: The "In My Shell" Edition 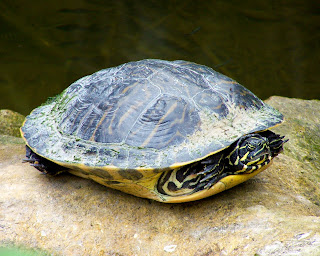 We've got another beautiful Saturday here, a little chilly, but gorgeous. It was a rough week for me with all kinds of things going on, incoming flak from all fronts, and "fires to put out" as they say, so I'm really just feeling the need to curl up on the couch with a stack of old movies or a good book and be very quiet. Seems like a good day to just crawl into my shell and hide for a day or so. Which is where I'm going now. Meanwhile, click on the links.

SWAC Girl has some fun blogging facts. Except now I feel so insignificant. But she has snow pictures, too, so it's all good.

Doug Ross has a great report on the card check bill.

Pundette wonders what happens if Obamacare passes and quotes Andy McCarthy who is dead on. Bob Belvedere has a great round up on who said what about the summit.

No Sheeples Here has the great photo of Charlie Rangel on the beach, with a tiny bit of her great Photoshop skills thrown in, and questions, GASP!, his ethics. But, you know, Nancy Pelosi is running the "most ethical" congress evah!

Be sure to check out snaggletoothie's round-up of this week's health care summit.

Fishersville Mike is looking forward to baseball season. First he's got to get rid of all that snow!

Bread Upon the Waters reports on Britian's tea-party today.

Frugal Cafe Blog gets impatient with Obama's uhs and uhms but when he starts whining about the car insurance he had in college, that's where we draw the line.

Stop by Potluck to read about "The Coffee Party." It's the anti Tea Party, you know? Another Black Conservative is also on the story. Little Miss Attila hates the name.

The White House blog continues to be great fodder for the right; Professor Jacobson sees another day of spin.

What do Obama and Roman Polanski have in common? Carol's Closet can tell you.

Not One Red Cent hammers the nail in Charlie Crist's campaign.

Bride of Rove has live-snarking of the summit...and it's hilarious.

WyBlog posted on the woman who was live tweeting her abortion, a story I tried really hard to ignore, but it looks like lots of people were covering it. No words on this one.

Have a happy Saturday and I'll check you later.
Posted by Pat Austin Becker at 8:22 AM

Pat, hope you found that quiet place to curl up on the sofa to enjoy some down time. Thanks for the Full Metal Jack Reach Around link ... enjoy being "in your shell" today, something we all need from time to time.

I may take your advice soon, Pat.

Enjoy the movies and the reading: a great combo in my book [forgive the pun].

Thank you for the link - you're always very generous to TCOTS.