Clarke Speaks Out Against "The Party Out of Power" 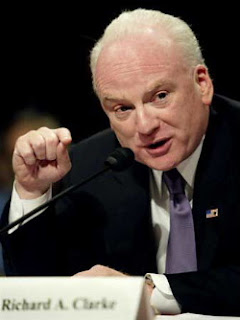 Richard Clarke, former counter-terrorism adviser for Clinton and G.W. Bush, calls in the New York Daily News for "the party out of power" to back off the criticism of Obama's national security policies.

Clarke lists several bones of contention in support of Obama's program. His first point is that it was Bush who released Gitmo graduates that have returned to fight for al-Qaeda, not Obama. Clarke says, "Obama's new review process has been successful in identifying those who might be recidivists and has kept them in custody."

Well, that remains to be seen, doesn't it? We don't really know yet what those that Obama has released are doing. We do know, however, that he has released some pretty unsavory characters, among them Hasan Zumiri (or Hasan Zemiri) and Adil Hadi al Jazairi Bin Hamlili and don't forget Qais Qazli who is about as nasty as they get. The point is, there's very little transparency here about who is getting released, why, and what happens to them afterward, so Clarke is making an assumption that Obama's releases have been, or will continue to be, risk free.

Clarke's second point, that terrorists will talk without torture, is also sketchy. Some might, some won't. I think Marc Thiessen makes this case pretty clear when he outlines how the CIA got information out of KSM which prevented another mass attack. We would not have obtained that information without enhanced interrogation. Clarke is off base when he assumes one strategy for everyone and every case.

Clarke then moves on to tout the security and safety of holding terrorists on US soil in US prisons. He says (emphasis mine),

There is a repeated chorus that housing Al Qaeda terrorists in U.S. prisons is some sort of risk to American security. For some reason they are supposed to be less risky if they are jailed in Cuba. Yet, there have been Al Qaeda terrorists housed in U.S. prisons for years. The Supermax facility in Florence, CO, has the Unabomber, the Oklahoma City bomber and the shoe bomber, and many other Al Qaeda terrorists. They are all in confinement in a place that is a lot more punishing than being in Cuba. U.S. federal prisons work well and no Al Qaeda prisoner is a Houdini.

Yet there is no good reason NOT to hold them in Cuba. The case has been made time and time again that Guantanamo is a model, Geneva compliant prison. The prisoners don't even want to come here! And maybe I missed something, but the prisoners Clarke listed are not al-Qaeda terrorists. I'm pretty sure the Unabomber was not affiliated with al-Qaeda.

You can read the rest of Clarke's argument here, but I've seen enough.

Update: As an afterthought, I want to go back to Clarke's point that only the terrorists released by Bush have returned to the fight. I still stand by my statement that it remains to be seen what happens with Obama's releases, but want to add that of course, one error should not lead to another. It is the obligation of the Obama administration to learn from the errors of the Bush administration. Bush certainly made some mistakes - he released some folks that should not have been released. Another huge mistake was not properly explaining the role of Gitmo or defending those who worked there. That led the American public and many of our overseas critics to blur the lines between Abu Ghraib and Gitmo.

Again, one would hope Obama would learn from those mistakes rather than compound them.


Related Post:
Richard Clarke on the Gitmo Video
(Via Memeorandum)
Posted by Pat Austin Becker at 10:54 AM

Glad you put that update up.

I was going to mention Obama shouldn't just make the same mistakes Bush made. But now all I can is just concur with you. LOL.