The Krewe Of Highland Parade 2010 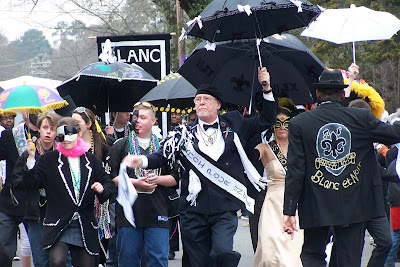 Boy are we wiped out! We did the Highland Parade in a big way today!

Let me say again how much we love the Highland Parade; it's really unique in that you have floats from both major krewes and then the Highland krewe joins in, too, as well as more bands and random groups. The Blanc et Noir Marching Society with the Red and Black Brass Band led things off today and as usual, set the right tone. And let me just send condolences to Robert Trudeau who lost his mom this morning; Robert was marching with his group, though, in his own tribute to his mom!

There are always lots of kids at this parade and Steve and I pass lots of our swag off to them. There was a precious little boy next to us with his parents and he was so small most of the big people were snatching things out of the air before he could get anything. Most of what he got he scooped up off the ground. We gave him lots of stuff, and he said "thank you" for every single thing! 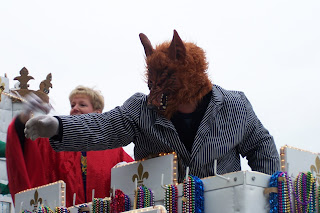 our float came through for me today! I got cups, beads and some kind of little football from them!

We caught hot dogs, and Heather had her very first Moon Pie (WHO has never eaten a moon pie before!?) We caught Tootsie Rolls, Sweet Tarts, bubble gum, fortune cookies and a small container of bubbles. Steve even scored a giant toothbrush and we managed to bring home two more Frisbees for the dog. Steve also got a Pirate Eye Patch from the pirate float, which he wore proudly for a little while.

By the time the parade came to an end a nasty cold wind was blowing and the clouds had moved in. I'm glad we were at the front end of this one!`

After the parade we went to eat Mexican food at Nicky's and now I'm parked on the couch under an afghan.
Posted by Pat Austin Becker at 5:32 PM

I'm glad my guys came through for you. They are a great group of people. I was regretting not riding after it turned into such a beautiful day!!

Thanks, Pat! Also, what a lovely blog!