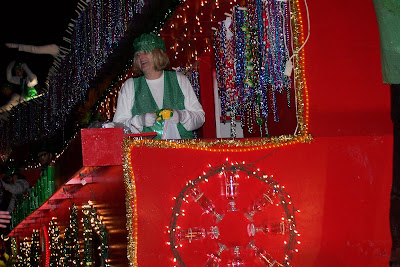 Big time at the parade tonight!

It was C-O-L-D cold, but we had fires burning and plenty of wood so we were good. Steve and I always walk down to my friend Harriett's house which is on the parade route and "park" there. There's always something on the grill and everyone brings something.

This year our old high school buddy Lisa showed up which was so fun! I hooked back up with her via Facebook and I asked her to come by, and she did. I'm posting a picture of Lisa and me; we took one with Harriett too, but I look god-awful in that one so I'm not showing it to anybody. My two high school friends have fared so much better than I have as far as aging goes!

We caught lots of cool stuff - Steve is tall - over 6 ft.; and he always catches the neat stuff. He got all the medallions and heavy beads. He caught a nifty stuffed fish and a stuffed rose. He also got a cool string of beads which I had to trade to Harriett for a Frisbee for the dog. W 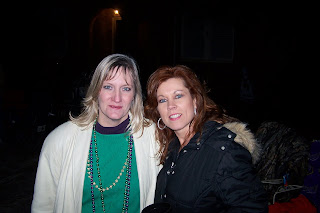 e got lots of plastic cups but no Frisbees. Harriett got one though, so we traded. And it was worth it because the dog is WAY happy.

The parade was all about Who Dat! which was the rally cry from every float. We were standing next to some funny guys who had a 12 pack of Coors Light in a box at their feet and they kept shoving it back and forth with their feet as the various floats rolled through - some pushing us back toward the curb and some moving back toward the middle of the street. At one point one of them offered Steve a beer, and he said, "Thanks, but I don't really do Coors..." and so the guy pulled a bottle of Miller Light out of his pocket, still cold, and offered it up, and Steve took him up on that one!

When it was all over, as predicted, we carried our tired selves home and now must rest before the Barkus and Meoux parade tomorrow and then the Super Bowl!