The Morning After The Super Bowl Round Up 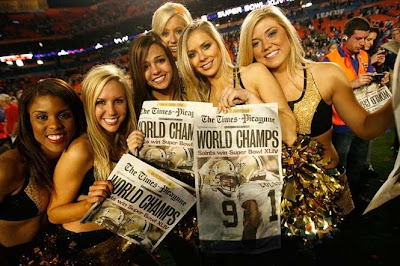 It's quite difficult to focus on political news when THE SAINTS HAVE JUST WON THE SUPER BOWL!

This blog will get back to politics shortly. Meanwhile, here's a round-up of the morning after commentary:

Red has the celebration videos. The folks in the French Quarter went wild, as one would expect!

The Dead Pelican went black and gold again last night and has lots of links.

My Bossier has Tracy Porter's interception video clip, and a video of a hilarious and unorthodox church service in New Orleans yesterday.

NOLA has the morning after write up and more video:

After the confetti had dropped, after the tears were shed, after they stood in front of the cameras and the microphones and tried to put the greatest night of their professional lives in perspective, Sean Payton and Drew Brees shared a quiet moment together. They hopped on the back of a golf cart, each with a hand on the shiny silver Vince Lombardi Trophy that rested in Payton's lap, each with a wide grin across their faces.

"Don't you just want it to slow down and last longer?" the coach said to his quarterback.

Governor Bobby Jindal's bet with Governor Daniels means that a "Who Dat" flag will fly over Indy this year!

The Hayride has thoughts after the victory:

It’s hard to form coherent thoughts when one is absolutely, completely numb.

The Saints winning the Super Bowl, as happened tonight, is that kind of event. Numbing. Until this year it was never even allowed, it seemed, for Saints fans to seriously think of their team as a champion...And while Payton is a sensational coach, Drew Brees is equally superlative. Brees is, to me, the epitome of what a star athlete should be – he exudes excellence on the field not based on overwhelming physical talent, though he’s unquestionably a phenomenal athlete, but all of the other factors. Brains. Character. Class. Work Ethic. Commitment. Courage. Leadership.

I'll update through the day as more trickles in.

Posted by Pat Austin Becker at 9:09 AM

We need to get Gore working on the fact that Hell has frozen.

"It's quite difficult to focus on political news when THE SAINTS HAVE JUST WON THE SUPER BOWL!" You ain't lyin! I must have spent the majority of my day trying to stay awake. Helluva a night! Thanks for the link Pat ;-D

Over the years I have heard that the Saints would win the Super Bowl on when Hell freezes over. It actually happend. Washington, D.C. is having record snow storms.