Louisiana Purchase Mary Wants You to Shut Up 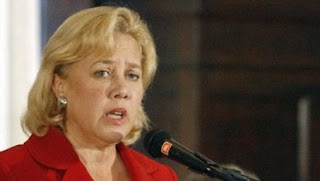 Louisiana Purchase Mary gets emotional as she defends her bribe today before the Senate, and she wants you to quit griping about it.

Somehow she still does not understand why people are angry that she made a backroom deal for more money for her state that other states won't receive. I live in Louisiana so I guess theoretically I should be sympathetic to her complaint, but Mississippi got hit just as hard by Katrina and they've moved on. They aren't getting a backroom deal.

The fact remains that she sold her vote for Obamacare. Period. She wasn't willing to vote for it until she got the money. That's a bribe.

Once again, a liberal response to criticism, "SHUT UP!"
Does Katrina Mary realize that she and her ilk hasn't abolished the First Amendment of the Constitution yet? So, we don't have to shut up.
Mary, First, get over yourself. You're not that important. You have sold your soul for $300,000,000.00, which make you the most expensive whore in New Orleans history.
Thank God you get your inspiration from your family, because quite honestly, from my understanding, they are just a crooked as you. And secondly, just about everyone north of I-10 can't stand you. So be thankful that most of Louisiana's population is south of I-10.
Also, Katrina happened nearly five years ago. When will the Katrina sympathy ploy going to expire?
I too am a Louisiana resident, and quite frankly, I'm sick of hearing about Katrina. It's old news and the majority of the problems in New Orleans should have been well underway of being taken care of by now. But without Katrina as your backstop, you would really have nothing to keep your corrupt ass going.

The States only paid $15m for the original Louisiana Purchase. Now it takes $300m to purchase a politician representing just a small portion of that territory. It’s embarrassing that $300m can buy a politician, but equally embarrassing that she feels it’s ok to defend it publicly. What a pitiful performance.

This group in Washington DC is really not in tune with most Americans and Mrs. Piggy seems to provide a perfect example of this syndrome.

Way to call her out. Got you linked

It is sad to see a US senator acting so desperate.