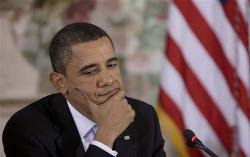 Andy McCarthy's post at The Corner yesterday regarding health care reform is required reading. It's a subject a lot of people are sick to death of by now, especially after the televised summit last week, but McCarthy has a different perspective on where the Democrats might be headed from here and it's one I've totally been forecasting for some time now.

They clearly don't care about public opinion. The voters have made clear for months now that they are opposed to this plan. There are elements in it that people like and want, but many that they don't. But the Democrats don't care. Their strategy at this point is to ram it through no matter the costs (in both dollars and votes) and let the chips fall where they may.

The Democratic leadership has already internalized the inevitability of taking its political lumps. That makes reconciliation truly scary. Since the Dems know they will have to ram this monstrosity through, they figure it might as well be as monstrous as they can get wavering Democrats to go along with. Clipping the leadership's statist ambitions in order to peel off a few Republicans is not going to work.

Pelosi is digging in. In a fundraising email she talks of "resolve" and says "history is within our reach." She tells the Sunday talk shows that she will have the 217 votes needed in the house to pass this monstrosity, even with the Senate's abortion language.

For McCarthy, it's clear that they will risk everything to get it through:

In the Democrat leadership, we are not dealing with conventional politicians for whom the goal of being reelected is paramount and will rein in their radicalism. They want socialized medicine and all it entails about government control even more than they want to win elections.

So how do you combat something like this? It's like the kamikaze pilots in World War II or the suicide bombers of today. They don't care what the cost, even if it's their own lives, the mission must be accomplished.

What Republicans need to do is start figuring out a way to roll this thing back once they return to power. I'm not saying give up the fight on stopping the health care bill, but have a plan for the future. McCarthy asks:

At the end of the summit debacle, President Obama put the best face on a bad day by indicating that he intended to push ahead with socialized medicine and face the electoral consequences ("that's what elections are for," he concluded). He's right about that. For Republicans, it won't be enough to fight this thing, then deride it if Democrats pull it off, and finally coast to a very likely electoral victory in November. The question is: What are you going to do to roll this back? What is your plan to undo this?

I'm wondering how much the next president is going to whine and moan about what he inherited from this one.

Hopefully, they are working on a plan to roll it back as they are simultaneously planning how to hold it off for as long as possible. Ann Coulter has been talking about repealing it since last fall, and I imagine that she's not alone in having considered this. That's why it's so troubling that Reid has put in language that would make repealing parts of it impossible.

And lol, I think, given that the next president will be a republican, that we will not hear any whining at all. Just rolling up the sleeves and getting to work on fixing this disaster.

My only fear is that once this type of legislation is enacted it is so damnably hard to get rid of and how in the world can they put things in a bill that can't be repealed? How can that happen in this country?

Quoted from and linked to at:
The Cold And Brutal Truth